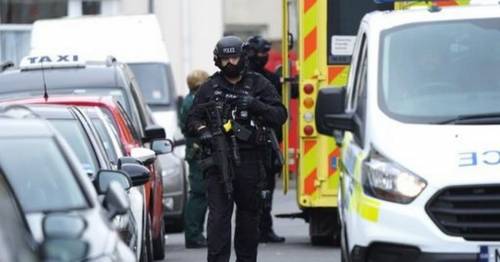 A man brandishing a large machete has reportedly been arrested after jumping from a window in Teesside.

Armed police descended on Stockton this morning during the incident.

It is believed that the man leapt from the window as police arrived in the building.

A witness told Teesside Live : "I was just waiting to get my car washed and seen all the police vans arrive and then they ran into a building.

"The next thing I seen a lad with a large machete jump from one of the windows at the top.

A man jumped out of a window as police descended on the building, it is claimed

"He looked like he had hurt his legs from the fall.

"Police on the street jumped on him and he was put in handcuffs."

Police have yet to provide details about what happened, but it is believed that two people were arrested.

An ambulance was seen at the scene, but it is not known if anyone was seriously injured in the incident.

A handcuffed man was seen being taken to an ambulance and looked at by paramedics.

Cleveland Police confirmed the incident had taken place and that four people were arrested.

A spokeswoman for the force said: "We were called at 9.07am to Lawrence Street, Stockton, to reports of an incident in the street between a number of males where it appeared a weapon was being used.

"Police attended including armed response officers and four men have been arrested."

She added that an investigation into the incident has been launched.

Previous : Byrne sees a longing for an ‘American Utopia’ as his show heads to cinemas
Next : Prince Andrew’s team accused of making sex abuse case more ‘complicated’ than needed