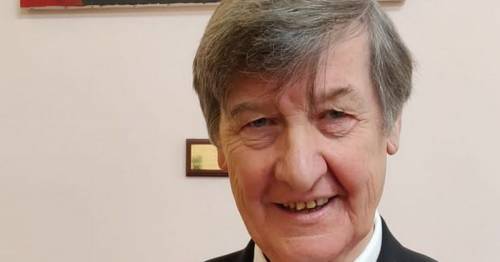 A man who ate 56 slices of bread a week has undergone an incredible body transformation after a doctor's stark warning.

Hugh Alexander, 72, from Stevenage, admits he never realised how his unhealthy his lifestyle was and the alarming impact it was having on his life.

Hugh says quitting his part-time job in B&Q a decade ago left him bored before he turned to constant comfort eating.

It wasn't until he joined his local Slimming World group in 2015, where he would later shed nine stone, that he began to take back control, reports HertsLive.

"I didn't see myself as fat," said Hugh.

"I was disgusting, I really was, and I look back now and I just let myself go.

Huge gorged on masses of bread every week
(

"That was the problem, and it was comfort eating, boredom eating.

"To me, those were the two main problems. I'd just retired early from a part-time job I had in B&Q and it was boredom. It's so easy to fall into that trap."

In 2015, Hugh went to the doctors who then sent him to Slimming World for 12 weeks, free of charge, because he had developed diabetes.

At the same time, doctors also advised him to go to the gym, which he also did for 12 weeks.

"I ended up having an angiogram," he added.

"That's how bad it was weight-wise. An angiogram is where a wire gets put up your blood vessel to see if there's any blockage to your heart.

Hugh after his incredible transformation
(

Hugh wanted to make a change and so joined his local Slimming World group in Great Ashby and Bedwell, which is run by Jan Tooley.

He found out that he weighed 27 stone and 1.5lbs at his first weigh-in.

But having now swapped his 56 slices of bread a week for rice cakes, veg and more exercise, he lost an incredible nine stone, dropping from a 62 inch waist to a 40.

"I was out with the dog this morning at half past eight, got back about 10 o'clock, but I could never have done that before," he continued.

"It was bad and you don't see it. This is the thing about putting weight on, you don't see yourself that way. Well, I definitely didn't see myself that way and it was a shock when I found out I was 27 stone and 1.5lbs.

"I was eating for the sake of eating. When I was working I'd have two slices of bread before I went to my work for my breakfast, I'd take four slices with me for my sandwiches and about two or three slices of bread a night.

"Now I don't eat bread at all, all I have is a small brown loaf and it lasts me about 10 days."

Time spent in the gym was an uncomfortable experience for Hugh.

He says he felt self conscious walking into a space with plenty of young people, most of whom were all ready fitness fanatics, and didn't really feel like fitting in.

The benefits of attending the weekly Slimming World groups though, even throughout lockdown, have been life-changing.

He says he wasn't judged by others and the encouragement from everyone spurred him on when things got tough.

He still attends group sessions now and has managed to keep the weight off.

"I can walk further since I lost the weight, the threat of diabetes has gone altogether, I got rid of my diabetes" he said.

"After about three or four months I'd lost a tenth of my body-weight. It's not easy, don't get me wrong, it's difficult.

"But once you put your mind to it, it's all in the mindset, and the support you get from everybody that goes, it's the best way."

Having seen the health benefits and how much happier he is since losing the weight, Hugh encourages anyone thinking about joining their Slimming World group to just go and do it.

"Join," he said, without a moment's hesitation.

"Even if you join for three or four months, you'll find you lose a lot of weight.

"I'd advise anyone to go, even if you just want to get a couple of stone off. I'm very grateful to them [at Slimming World]. They helped me a great deal and even to this day if somebody says to me 'Oh, I only lost half a pound' I say, 'Are you stupid man?' I'd love to lose half a pound every week. People want it now, that's the problem.

"It's hard to do. It's like smoking, but it's a mental thing. I'm quite proud of what I've done."

To find out more information about your local Slimming World group, press here.