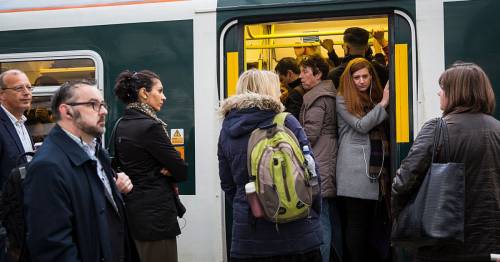 Rocketing public fear over the cost of living crisis is signalled by a majority believing the rail strikes are justified.

A poll showing that 57% think the workers have good reason to take industrial action and 66% that the Tories could have done more underlines why Boris Johnson is wrong to expect union bashing to be popular.

Nobody likes to be inconvenienced by cancelled trains but most understand strikes when they too suffer the painful living standards crunch of inflation far outstripping wages.

RMT railway workers represent millions of other workers nationwide who are angry that the PM lectures them to take real terms pay cuts while bosses, including rail bosses and bankers, enjoy sky high salaries.

Fresh inflation figures will fuel working Brits’ anger and the Treasury announcement that pensioners could receive 10% next year means paltry 3% offers look worse than ever.

The picket line outside Bristol Temple Meads station this afternoon
(

We want to see the rail dispute resolved and other strikes avoided – but that requires the Tories to pay fair and alas that’s something they are refusing to do.

Mega-rich donors filling the Conservative Party’s coffers on the eve of the rail strikes vividly demonstrate whose side Boris Johnson and the Government is on.

The Tories banking huge amounts from a well-heeled few while insisting the rest of us swallow savage cuts in living standards tells us everything we need to know about whose interests the Conservatives really represent.

Many of us will today be trying to stand on one leg for 10 seconds after it became recognised as a sign of longer life.

Unlike lawbreaking, lying schemer Boris Johnson, who no longer has a leg to stand on.