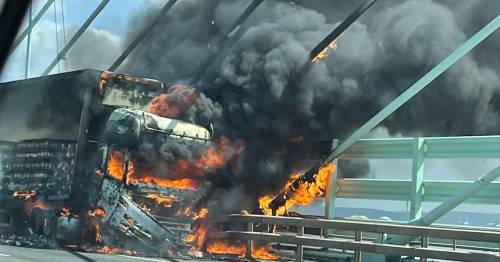 M4 closed: Lorry carrying ‘pallets of wine’ goes up in flames on Prince of Wales bridge

A lorry carrying 24,000 bottles of wine has gone up in flames on a bridge closing a major motorway.

The lorry fire on the M4 Severn Bridge has closed the west bound carriageway today with emergency services at the scene.

The M4 Prince of Wales bridge linking England and Wales over the River Severn was shut down heading to Wales after the lorry carrying pallets of wine burst into flames in the heat.

The blaze destroyed the truck carrying 24 pallets each with 84 cases of wine.

Traffic was brought to a standstill in both directions affecting thousands of drivers – some of whom took to their cars to avoid rail chaos.

Emergency services at the scene
(

Driver Reena Leyshon, 37, said: "It was an incredible site – just a huge plume of smoke coming off the bridge.

"It was like a disaster movie. Everyone was just stranded and nothing we could do."

Another driver said: "Just to think I didn't get the train today because I thought it was easier to drive to Wales from London. Then this happened.."

Avon and Somerset Police told The Mirror: "A lorry fire has closed the westbound carriageway of the M4 Prince of Wales this afternoon, Wednesday 22 June.

"Emergency services were alerted at about 3pm and police, fire and Highways teams remain on the scene.

"Travel disruption is affecting the M4 and M5 in our area so please find alternative routes if you can.

The lorry up in flames on a major bridge
(

"We expect the bridge to remain closed westbound pending recovery of the vehicle, assessment of any damage to the road surface or bridge structure and any necessary repairs."

"All traffic has been temporarily held on the M4 Prince of Wales Bridge heading Westbound due to a vehicle fire.

"Emergency services are on scene. Congestion in the area, please plan ahead to avoid delays."

One woman stuck in traffic on the bridge told Wales Online she has seen about six fire engines and a few police cars pass her.

Roads around the bridge were also congested
(

She said she can only see black smoke from the site of the incident.

"There are reports that the lorry is carrying a large number of pallets of wine."

Smoke can be seen from miles away
(

It said there is a diversion via the M48 Severn Bridge which is already slow and is "getting worse".

The bridge – formerly known as the Second Seven Crossing – carries more than 40,000 vehicles a day between England and Wales.

Opened in 1996 it was officially renamed the Prince of Wales Bridge in 2018.

Roads around the bridge were also congested as drivers seek to navigate past the closure.