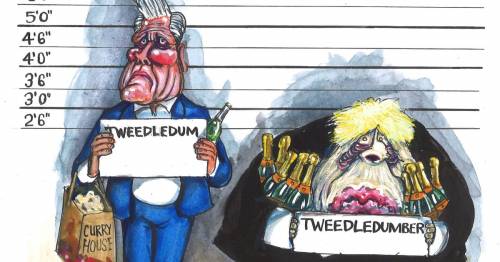 Tomorrow’s pomp-and-pageantry Queen’s Speech already carries the taint of irrelevancy when the worsening cost of living crisis persecutes families and both major national political parties and their leaders are sweating profusely.

Jaded Johnson’s tipping point could be red wall Wakefield falling to Labour and blue wall bastion Tiverton tumbling to resurgent Liberal Democrats. Losing another two Westminster constituencies could be too much for Tory MPs after the Prime Minister cost nearly 500 Tory councillors their seats.

The kick in the ballots for the Cons is blamed on the dishonest, incompetent charlatan by many in his party, including in Parliament and even his Cabinet, as scales drop from eyes recognising Johnson is politically as well as morally bankrupt.

Partygate is only one offence on Johnson’s charge sheet, with tax rises, hard-pressed households being abandoned, the country being levelling down instead of up and – the Tories even privately admit – there are few if any Brexit opportunities.

Labour star performer Lisa Nandy gave a spirited defence of Keir Starmer, a boss who beat her to that party’s top role. Yet there’s no concealing the truth a Labour marching confidently to Government would have gained considerably above the 250 seats collected last week.

Progress in London, Wales and Scotland was not matched in England’s North and Midland.

And Starmer’s position itself is in jeopardy.

The police and a Crown Prosecution Service once run by Starmer may however decide otherwise and, after demanding Johnson and Rishi Sunak resign, he would face intense pressure to do so himself.

The Beergate saga feels like a Tory smear and senior Labour figures are frustrated Durham constabulary going after him is at best a distraction and, at worst, a hope-ending disaster.

Previous : ‘Sinn Fein’s victory in the Stormont election puts everyone on the spot’ – Paul Routledge
Next : Exact date heatwave will end as Britain sizzles in 23C sunshine this week