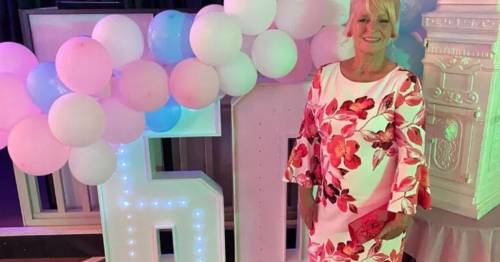 A loving mum-of-two died just three days after being diagnosed with lung cancer, after first being told her chest pains were probably muscle strain.

Jackie Baker was just 60 years old when she died on December 20 at Aintree Hospital with her family by her bedside.

She had been rushed to hospital earlier in the month, after she began struggling to breathe.

Jackie's son, James, told the Liverpool Echo his mum had been to the doctors six weeks before with chest pains, which she was told were down to muscle strain.

But after being admitted to hospital in December she was told she had pneumonia and was later diagnosed with terminal cancer.

Jackie, from the Norris Green area of Liverpool, leaves behind husband John, 66, sons Neil, 38, and James, 34, and four grandchildren.

Paying tribute to Jackie, James said: "She was just individual and I don't think there's anyone like her in the world.

"She was a loving person who would do anything for anyone but she was also dry with her humour. A lot of people didn't get her at first but then they found out how she was."

James said: "She went into hospital on 5th December. They diagnosed her with pneumonia and we kind of accepted that.

"She was in for a while and she did improve. She was on oxygen and then she took a turn for the worse."

He added: "On the Friday, they diagnosed her with lung cancer and she passed away three days later, so that's how rapid it was."

James said his mum had always been worried about her health after she suffered from a "mild stroke" in her early 40s.

When she was first admitted to hospital in December, James said: "I never for one second at that time thought 'my mum is really ill.'

"I knew she was poorly but I was thinking 'is my mum going to be home for Christmas?'

"My dad had got the Christmas tree up to surprise her when she got home. That was our mindset at the time, for the first week."

Following his mum's sudden death, James is hoping to raise awareness of lung cancer and the importance of getting any symptoms checked.

James will be running the Aintree half marathon on his mum's birthday, February 13, with all money raised going to the Roy Castle Lung Cancer Foundation.

James said: "I think the main reason for wanting to do it is wanting to spread knowledge that you should keep an eye on yourself, especially with the covid situation, it's hard to get a doctors appointment with all the [backdated appointments] and that.

"I think that's the main reason, because three days is nothing is it? In the timeline of things, to find out you've got cancer to then die."

You can donate to James' Gofundme page here.

Previous : Baby dies in mum’s arms as she finally gets to hold her after tragic 16 week scan
Next : Strong rise in U.S. consumer prices gives Fed little respite