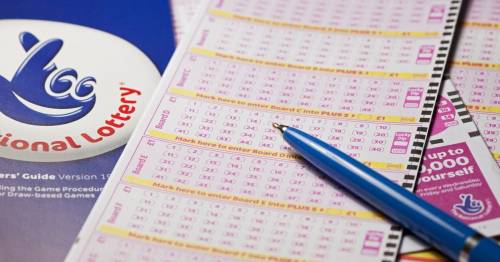 "Players are being urged to check their tickets and to give us a call to claim this fantastic prize."

He added: “This week Lotto players can enjoy £25 off great days out at top attractions and experiences across the UK with The National Lottery Days Out promotion this autumn. Visit www.NationalLotteryDaysOut.com.”

Did you win? Let us know at webnews@mirror.co.uk

Tickets are on sale from most UK newsagents and supermarkets from 8am to 11pm, except when there’s a draw, in which case tickets can be purchased until an hour before.

Each one costs £2. Lotto draws take place on Wednesday and Saturday evenings from approximately 7.45pm.

As well as changing lives of the prize winners, the National Lottery funds projects all over the UK.

Every week part of the ticket sales goes towards good causes.

Nobody won the biggest ever EuroMillions £184 million jackpot yesterday

Players have to be 16 and over and physically in the UK or Isle of Man.

If you really can’t choose and you’re finding the pressure too much, you can always select a Lucky Dip and let the machine choose a random selection for you.

The Thunderball is worth £500,000 and draws are held every Tuesday, Wednesday, Friday and Saturday.

Yesterday, nobody won the biggest ever EuroMillions £184 million jackpot as it reached the limit for the first time.

The all-time record amount – set in February – was reached after a rollover on Friday but tonight's draw was not won by anyone so no players manage to take advantage and claim the lot.

If anyone from the UK banks everything this Friday (October 15), they would become Britain's biggest ever National Lottery winner since its launch in 1994.

Such was the interest in the massive jackpot last night that a last-minute rush for tickets caused the website and app to run more slowly, meaning some hopefuls were not able to buy a ticket at all.

The National Lottery said: "Sorry if you were unable to buy a ticket for tonight's EuroMillions draw.

"This is the biggest ever EuroMillions jackpot, and there was a huge influx of players trying to buy a ticket before the cut-off time, and this caused the website and app to run slower than normal."

Camelot's Andy Carter said: "It's all to play for on Friday night as the whopping EuroMillions jackpot of an estimated £184 million remains up for grabs.

"EuroMillions has now hit its cap, which means any money that would have gone into the jackpot will now boost prizes in the next winning prize tier.

"If one UK winner banks the lot, they would instantly become the UK's biggest ever National Lottery winner. Players are urged to get their tickets early to be in with a chance of winning this extraordinary prize."

There have been five UK EuroMillions jackpot winners so far this year, including the anonymous winners of £122 million in April and £111 million in June.

The biggest recent UK winners to go public were Frances and Patrick Connolly, from Northern Ireland, who scooped a £115 million prize in 2019.

Previous : Drink-driving pensioner swigged wine behind wheel – even after police pulled her over
Next : Millions of women liked wearing a mask during pandemic – as it disguised their skin