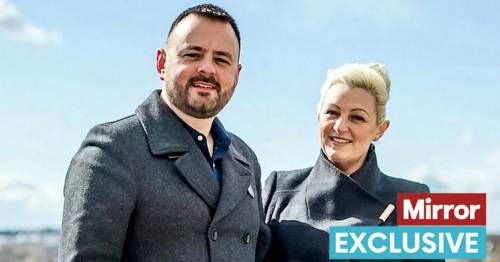 A Set for Life winning couple have discovered how much cheaper life is as rich people since they scooped the National Lottery game's top prize.

Laura Hoyle and Kirk Stevens now have the cash to bulk buy loo roll and toilet paste after bagging £10,000 a month for the next 30 years.

The frugal couple have also bought their phones up front – meaning they've slashed their monthly bills in four – and have ditched takeaways and ready meals now Laura has time to cook healthy dishes after quitting her job.

Getting a mortgage has proved difficult for the aspiring landlords, whose applications were rejected by all but one bank despite their hefty income.

The biggest change has been to Laura's mental health now she's ditched a job that had her coming home in floods of tears every day.

Instead of putting in 90 hour weeks for someone else, the 40-year-old pursues her passion for paranormal investigations full time.

"We have actually got more stingy," explained Laura.

"I haven't gone for anything more upmarket since winning. For me, I look at something, and if it's a thousand pounds I think' no way, I'm not buying that'.

"Some people have always dreamt of having this kind of money and buying what they want. I look at something and think 'that's poor quality and not worth it."

Just over a year after Kirk and Laura, from Nottingham, bagged the top prize by matching all five main numbers plus the Life Ball, they chatted to the Mirror about how their lives have changed – and how they spend their winnings.

When it comes to clothes shopping, Laura says the only change now is that she will order a fresh garment online before sending one that doesn't fit back – something made possible now she is free from cash-flow problems.

In terms of brands the Wolves native has stuck with her favoured Ted Baker.

One big change is what they eat. Now Laura has ditched her job, she has plenty of time to cook healthy meals every day of the week.

"Before we were eating a lot of convenient stuff and takeaways, when I was working 14 hour days," she said.

"Now I refuse to do that. We need to stay alive longer."

Along with unhealthy eating, the couple's mobile bill is another thing that has been cut down – from £40 each a month to £10 – as has the amount they spend on groceries.

"We've cut everything out. It's weird," Kirk said.

"We do tend to buy a lot of bulk. Why go to supermarket and get 16 loo rolls when you can go on Amazon and get 56 loo rolls for the same price.

"Same with deodorant. Shower gel, shampoo, toothpaste. That's a lot of what we do now. The next door neighbour thought we were hoarding toilet roll during Covid."

Laura and Kirk have found that now they have a sizeable guaranteed income dropping into their bank accounts each month, life is much cheaper.

"It's kind of backwards, the more expendable cash you've got, the cheaper everything is," Laura said.

"Like with our phones. We both have Samsungs and we paid outright, so it only costs £10 a month."

Laura and Kirk are hoping to become landlords
(

The couple are still in the home they were living in when they hit the jackpot, but they're soon going to be moving into a new property in Nottingham – swapping one bedroom for five, so their friends from Wolverhampton can come and visit.

"We need more room for all the bulk buying," Kirk joked.

Laura, who is excited by the prospect of splashing some cash when she decorates their new home, remains single minded in her ambition to become a landlord.

"Everything has been going into savings," she said of their Set for Life winnings.

"The aim is to be landlords and to have a portfolio. When we won I said to Kirk 'the next five years are not going to be plane sailing'. It's about getting a portfolio together."

One potential obstacle they face is that mortgage lenders are shy when it comes to people who've got their money through gambling, as the lottery is technically categorised, meaning they have to prove themselves by getting a large deposit together.

"I have only found a couple (of lenders) that will actually touch me, they will not mortgage a gambler," Laura continued.

The moment that Laura found out that she had won
(

Laura and Kirk have been remarkably restrained when it comes to spending sprees since their win.

On the night they found out the good news the pair drank four bottles of prosecco together before Laura watched the complete Divergent series to pass the time until morning as her mind raced.

The biggest purchase came in the form of a Porsche Cayenne, which they've since swapped for a Fiat Spyder for the summer months.

Otherwise they eat at the same Chinese and pizza restaurants and waited until the Easter sales to buy two 85 inch TVs for their new home – saving more than £500.

In the 14 months since they won not a single person has approached Laura or Kirk asking them for money. But that hasn't stopped them helping their nearest and dearest.

"We have helped people," Laura said.

"We paid off car payments for family members and replaced TVs that had broken. (We helped) a friend that had a bit of trouble with her business. But no one has asked us for money."

Kirk added: "We paid someone's car tax. These little things can make people's day if they aren't expecting it."

While Kirk resisted the temptation to buy everyone a round in his local – primarily because he doesn't like most of them – he does enjoy getting more drinks for friends when out.

In the first few months after their victory, Laura and Kirk found people actually wanted to buy them drinks rather than the other way around.

They've since ploughed their money into paranormal investigations

For Laura, quitting her job was a no brainer now that she has a solid income.

"I was telling Laura to quit her job for months and months, she had such a rough time at the place that she worked," Kirk said.

"Every day she was coming home in tears, and then this wonderful thing happened. There was no thinking about it. It needed to happen."

Now Laura, who says she liked her old colleagues but not her job, spends four days a week editing dozens of hours of footage she records alongside Kirk during their paranormal adventures.

Each weekend the couple visit a spooky location, such as the National Justice Museum in Nottingham, and set up six cameras in the hope of spotting something paranormal.

Highlights include a creepy figure which walked behind Laura as she moved through tunnels beneath Smethwick, and several shadow figures.

The edited films are uploaded onto Youtube as K & L Ghost Hunters.

Laura says she is living the "dream" by working a job that she loves to her own schedule, and feels much more relaxed about life now than she did before.

"I've been training for nine years to get to the position," he said.

"There was no chance I was quitting. If you're doing something that you love, which I am, there's no question."

In the future he plans to make paranormal investigation products using his woodwork and electronic skills.

The couple are determined to build a property portfolio as those payments will become less and less valuable over time.

If the next 30 years follow the same pattern as the last 30, then that money will be worth around £5,000 at the time of their last payment.

Previous : Ralf Rangnick’s 4 most controversial Man Utd remarks as Rio Ferdinand calls him “distasteful”
Next : Family of man missing in Ibiza given fresh heartbreak after death of his big sister