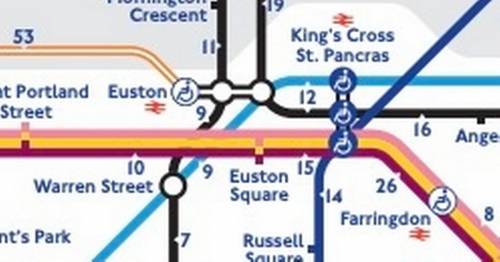 London walking map: How long does it take to walk between Tube stations ahead of strike?

A map showing walking times between Tube stations has emerged in the face of imminent rail and London Underground strikes set to unleash chaos.

The biggest rail strike in modern history is planned for Tuesday, Thursday and Saturday.

The London Underground will also be crippled from Tuesday in a walkout not seen on such a scale since 1989 in a row over pay, jobs and conditions.

The map was last updated in June 2020 and shows the travel times in minutes based on a moderate walking speed.

Have you walked between Tube stations before? Have your say about the estimate timings in the comments below

The map reads: "Walking can be a quick and easy way to get around, particularly when travelling during the busiest times, which are 5.45am-8.15am and 4pm-5.30pm from Monday to Friday.

"This map shows how much time it takes to walk between stations on the same line."

Members of RMT union voted for action in May over pay and job losses.

The union says 50,000 railway workers will walk out on June 21, adding that the action will affect the national railway network for the entire week.

General secretary Mick Lynch said: "Railway workers have been treated appallingly and despite our best efforts in negotiations, the rail industry with the support of the government has failed to take their concerns seriously.

"We have a cost-of-living crisis, and it is unacceptable for railway workers to either lose their jobs or face another year of a pay freeze when inflation is at 11.1% and rising.

"Our union will now embark on a sustained campaign of industrial action which will shut down the railway system.

"Rail companies are making at least £500m a year in profits, whilst fat cat rail bosses have been paid millions during the Covid-19 pandemic.

Commuters are going to have a tough week
(

"This unfairness is fuelling our members anger and their determination to win a fair settlement.

"RMT is open to meaningful negotiations with rail bosses and ministers, but they will need to come up with new proposals to prevent months of disruption on our railways."

A Department for Transport spokesperson said: "Strikes should always be the last resort, not the first, so it is hugely disappointing and premature that the RMT is going ahead with industrial action.

"The Government committed £16 billion – or £600 per household – to keep our railways running throughout the pandemic while ensuring not a single worker lost their job.

"The railway is still on life support, with passenger numbers 25% down and anything that drives away even more of them risks killing services and jobs."