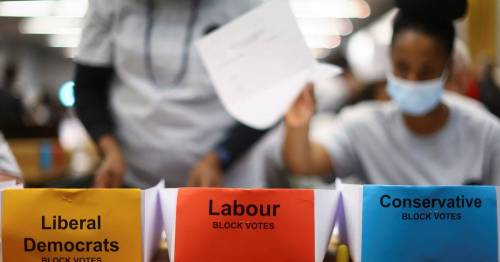 Local elections: See what the local election results are in your area using interactive gadget

Boris Johnson has been hit by a backlash from local Tory leaders after a series of disappointments at the polls.

Results have started to flood in after millions of voters went to the polls in a critical set of local elections.

The picture emerging so far has been mixed, with early losses for the Tories, some modest gains for Labour and strong performances from the Liberal Democrats and the Greens.

But Mr Johnson faced open criticism from his own party for poor performances in Cumberland, London and Portsmouth.

In a major upset, Labour seized control of Wandsworth – once dubbed Margaret Thatcher's favourite council – which has been Conservative since 1978.

A source told the Mirror: " Boris Johnson losing Wandsworth is monumental. This was the Tories' jewel in the crown."

Labour is also pushing for victory in the Tory stronghold of Westminster and Barnet in north London.

The Conservatives also lost Worcester to no overall control. Council leader Mark Bayliss, who left the count long before the result was declared, blamed Partygate for the poor Tory performance.

Labour saw off the Conservative threat in Sunderland and maintained their position in Hartlepool, which stayed under no overall control despite the shock Tory by-election win in the constituency last year.

He told the BBC : "I think it is not just Partygate, there is the integrity issue. Basically I just don't feel people any longer have the confidence that the Prime Minister can be relied upon to tell the truth."

In Portsmouth, where the Tories lost four seats, Simon Bosher the leader of the Conservative group said Mr Johnson should "take a good, strong look in the mirror".

He blasted the Prime Minister, saying "those are people that are actually bearing the brunt on the doorstep of behaviour of what's been going on in Westminster".

Polling expert Professor Sir John Curtice said: "These results are confirming that the Conservatives have suffered something of a rebuff from the electorate."

But he said Labour were not benefiting as much as they would expect from Tory woes.

It's been a good night so far for the Liberal Democrats and the Greens who have both seen an increase in support, albeit starting from a lower base.

Could Keir Starmer lead Labour to a general election victory?

The Lib Dems won Hull from Labour after a two-way scrap between the parties – and insiders were delighted to unseat the Tory leader of Colchester.

There's still a long way to go before a true picture emerges, with declarations expected to pour in throughout the day.

Results from Scotland and Wales are not expected to become clear until later on today.

Meanwhile, the first MLAs in the Northern Ireland Assembly are due to be returned this afternoon but the final result is not expected until Saturday.

Previous : British YouTube star arrested near Russian space launchpad in Kazakhstan – World News
Next : Local election results: What do Tory losses mean for PM and is Labour heading for power?