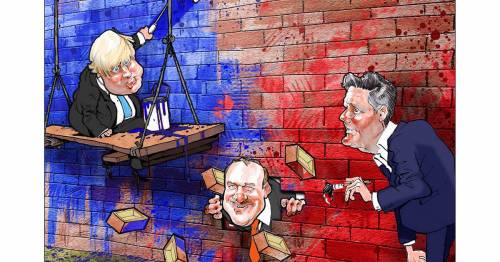 “It was,” said one Tory backbencher, “less bad than we thought.”

I like that. Favourite thing to come out of these local elections. Less bad.

I might start using that when I’m breaking terrible news to people.

As analysis goes, it’s two days after the event and I’m still not entirely sure what happened, what any of it means.

At this point, to be frank, you would be better off with one of those characters from Ancient Babylon that divined the will of the gods by cutting open a sheep and studying the entrails.

Haruspex, I believe. It would certainly liven up Newsnight.

Boris Johnson's Conservative Party has seen losses in the election
(

“So what happened at the local elections?”

There’s no such thing as crystal-clear analysis at the moment from anywhere.

It feels like everyone in Westminster is guessing, and the games of spin carried out by the main parties are getting more and more elaborate.

With these elections, the waters were muddied by all the “expectation management” in the run-up.

Expectation management, according to the Westminster glossary I carry around, is a fancy way of saying “total bullsh**”.

Keir Starmer has seen gains in the local elections
(

In the end, they were probably the only ones telling the truth.

The Tories lost some London councils, but London turning to Labour is not entirely unexpected.

Why it’s less bad for Mr Johnson is the lack of damage done in the red wall, which looks like it’s holding.

Having said that, it’s not necessarily the red wall where the trouble is. The blue wall is getting some hammer.

There was significant Lib Dem progress in taking seats off Tories where Mr Davey’s lot were in second place. That is worrying the Tories.

As I write, all the numbers show there’s no clear path to power for the Tories or Labour next time around. It is going to be a mess for some time.

Attritional politics, with Labour willing the Tories to mess up, and the Tories letting Labour punch themselves out.

Rope-a-dope politics that goes all the way to the 12th round.

Anyway. On to Wakefield. The plotters on the Tory backbenches are keeping their powder dry until then. Tricky for the Tories, but winnable.

More pressing is the Sue Gray report which has been coming any day now for a long time.

If Mr Johnson makes it through that, there is a growing cost of-living crisis, conference season, inflation going to 10%, a new energy crisis, war and then Christmas.

Surely he can’t survive, although I’ve been saying that since this time last year. I tell you, forecasting is a mug’s game.

The bookies reckon he can, drifting out as we speak to a decent price to keep going beyond 2023 – 2024 even.

Previous : Michael Gove and ex-wife set to take £400,000 hit on sale of family home
Next : Freedom Convoy protesters say they are struggling to get seized items back from police