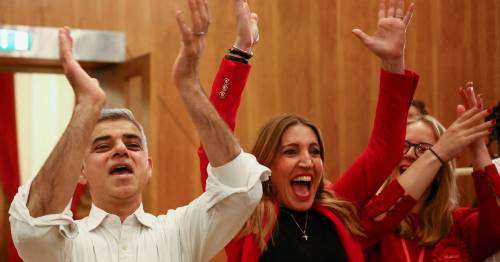 Labour has seized control of two Tory councils in London the first time in decades as Boris Johnson was hit by a string of local election losses.

Wandsworth, which was known as Margaret Thatcher's favourite council, turned red in the early hours of this morning, followed by Westminster – another totemic Tory council.

Labour also clinched victory in Barnet in north London, in a boost for Keir Starmer. The party had fared badly in the area, which has a large Jewish population, due to the anti-Semitism row that dogged Jeremy Corbyn's leadership.

It comes as Mr Johnson was hit by a backlash from local Tory leaders after a series of disappointments at the polls.

He said: "Let's not be coy about it, of course national issues were part of the dilemma people were facing."

A Labour source said: "Boris Johnson losing Wandsworth is monumental. This was the Tories' jewel in the crown.

"Voters in Wandsworth have put their trust in the change Keir Starmer's Labour represents."

Labour also called victory in Westminster for the first time since its creation in 1964.

The Tories were hit by further misery in London as the Conservative leader of Barnet Daniel Thomas said his party had lost control of the council.

Mr Thomas said: "I think this is a warning shot from Conservative supporters and I think our loss today is not only due to the fact that I have just mentioned but also a fair number of Conservative voters who just didn't go out to vote, stayed at home."

London Mayor Sadiq Khan and shadow minister Rosena Allin-Khan were both at the Wandsworth count, where there were jubilant scenes from Labour activists.

Mr Khan said Boris Johnson had been a "vote-winner for Labour" as voters were fed up of the Prime Minister.

The new Labour leader of Wandsworth council Simon Hogg said the victory signalled it was "time for change" at the top of the Government.

He said: "We are going to build a compassionate council that truly listens and keep that same low council tax.

"But when we were calling around on voters we didn't even have to raise partygate, we didn't have to mention Boris Johnson.

The loss of Wandsworth will be a blow to Boris Johnson
(

"People have formed their own views on this Government, so I am afraid it is time for change at the top as well."

Dozens of Tory councillors have lost their seats in the first tranche of results, with local Conservative leaders rounding on Mr Johnson.

Labour has made modest gains so far, while the Liberal Democrats and the Greens have had a good night, albeit starting from a lower base.

Keir Starmer's party won back control of Southampton from the Tories and secured a majority in newly-created Cumberland, which covers three Tory Commons constituencies – Carlisle, Copeland and Workington.

Labour saw off the Conservative threat in Sunderland and maintained their position in Hartlepool, which stayed under no overall control despite the shock Tory by-election win in the constituency last year.

Could Keir Starmer lead Labour to a general election victory?

The Conservatives also lost Worcester to no overall control. Council leader Mark Bayliss, who left the count long before the result was declared, blamed Partygate for the poor Tory performance.

He told the BBC: "I think it is not just Partygate, there is the integrity issue. Basically I just don't feel people any longer have the confidence that the Prime Minister can be relied upon to tell the truth."

In Portsmouth, where the Tories lost four seats, Simon Bosher the leader of the Conservative group said Mr Johnson should "take a good, strong look in the mirror".

He blasted the Prime Minister, saying "those are people that are actually bearing the brunt on the doorstep of behaviour of what's been going on in Westminster".

The Lib Dems won Hull from Labour after a two-way scrap between the parties – and insiders were delighted to unseat the Tory leader of Colchester.

There's still a long way to go before a true picture emerges, with declarations expected to pour in throughout the day.

Results from Scotland and Wales are not expected to become clear until later on today.

Meanwhile, the first MLAs in the Northern Ireland Assembly are due to be returned this afternoon but the final result is not expected until Saturday.

Previous : Local elections: What does a mayor do? As Bristol decides to abolish post
Next : Mother of Gabby Petito files wrongful death lawsuit against estate of Brian Laundrie