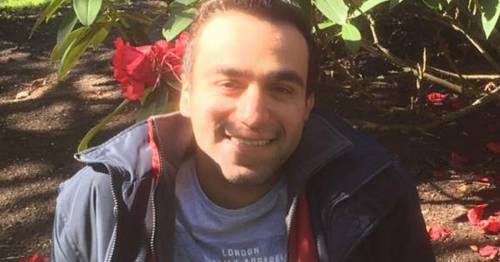 Sickened relatives of Liverpool bomber Emad Al Swealmeen have called him a "coward" saying he should have been executed if he had survived the blast.

One horrified family member reportedly took to Facebook to denounce the 32-year-old, who died when his homemade bomb exploded in the back of a taxi as it pulled up outside Liverpool's Women’s Hospital at 10.59am last Sunday.

The Iraqi-born failed asylum seeker was sat in the back of the cab, driven by father-of-two David Perry, 45, who fled before the car was engulfed in flames.

The Sunday Times reports that after learning of the attack, a male relative of Al Swealmeen posted: “If he was alive, I would be the first to call death upon him should he be found guilty."

Another sickened member of his family distanced himself from him calling him a "coward" and saying he failed to understand why Al Swealmeen committed such a despicable act, the paper adds.

Emad Al Swealmeen has been called a coward

The 32-year-old died in the explosion

It has also been revealed that Al Swealmeen was was not the penniless refugee from Syria he claimed to be but came from a middle class family living in Jordan.

The motor racing enthusiast changed his name to Enzo Almeni so he could sound "more western" taking inspiration for his new identity from the late Formula One boss Enzo Ferrari.

He had also given himself the nickname “GT” after Grand Turismo and was so passionate about the sport that he had a chequered flag tattooed on his arm with a chequered flag, the Times adds.

A relative in Amman, Jordan, told the paper. “His father and mother are good people. We learnt about the attack on social media. I was very surprised.”

Earlier this week police said Al Swealmeen had been formally identified as the man killed in the Remembrance Day blast as searches of nearby properties continue.

On Thursday Assistant Chief Constable Russ Jackson, of Counter Terrorism Police North West, said they had traced a relative of his and would be speaking to them about the case.

Al Swealmeen is believed to have arrived in the UK from the Middle East in 2014.

He had an application for asylum rejected in 2015 and had lodged at appeal at the time of his death.

He claimed to be a broke refugee who wanted nothing more than to "bring Jesus into his life".

But despite converting Christianity four years ago but it has been claimed that he had been attending a local mosque.

David Perry survived the blast in his cab

At the age of 25 Al Swealmeen left his parents, sisters and at least one brother behind at the family home in Dubai.

He is believed to have travelled illegally to the UK where he claimed he was a penniless refuge from Syria.

Police and security agencies are assuming he flew from the UAE and it is not known if he used a fake passport or was smuggled into the UK.

It is believed he hid the truth about his background but admitted he was from Jordan and had family living in Dubai which could be why his asylum application was rejected.

Earlier this week, Home Secretary Priti Patel claimed he had exploited Britain’s “dysfunctional” immigration system by staying in the country.

A year after he arrived in the UK he was sectioned after trying to kill himself by jumping off a city centre overpass while wielding a knife.

He started attending Liverpool Cathedral after he was discharged from hospital and met an evangelist Christian couple, Lieutenant Colonel Malcolm Hitchcott and wife Elizabeth, both 77, before moving in with them two years later.

Mrs Hitchcott said she and her husband loved Al Swealmeen

Mrs Hitchcott previously said: “It’s so terribly sad. We just loved him. He was a lovely guy and we are so shocked. It’s all too much.”

Police believe Al Swealmeen had been renting a property in Rutland Avenue in Liverpool and was making “relevant purchases” for his bomb since at least April.

He lived with them for eight months in 2017 and they said he was “quiet and well mannered” man who was also quite artistic.

They did say he had mental health issues but added: “We are shocked because a less likely candidate you could not imagine,” he said.

Previous : Sudan military to reinstate PM Hamdok after deal – Umma Party head
Next : Hero strips to his underwear and jumps into docks to save drowning toddler