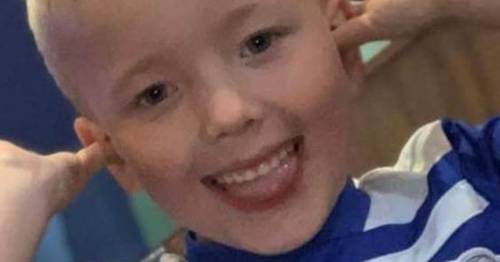 Heartbreaking voice notes of a six-year-old boy crying 'no-one loves me' and 'no-one is going to feed me' before he died in hopsital from a brain injury have been released.

His father Thomas Hughes, 29, and his former partner Emma Tustin, 32, have denied murder charges and are on trial at Coventry Crown Court.

Now distressing audio recordings played to the jury have been released which shows little Arthur crying out that "no-one loves me" four times in a 23-seconds.

In another audio clip, Arthur cries that "no-one is going to feed me" seven times over 44-seconds.

Voice notes of Arthur crying sent from Tustin's phone have been prominent over the course of the trial.

The jury heard Tustin would often message Hughes within minutes of him leaving the home with an audio file of Arthur crying accompanied by a text saying words to the effect of "started again" or "still going."

The prosecution said Tustin recorded more 200 voice notes during the three-month period. Arthur has been heard calling for his uncle and grandmother in some of them.

He has also been recorded asking for a drink. While in other clips Tustin's voice could be heard saying "stand still" and issuing other similar instructions.

The jury was also shown heartbreaking CCTV of Arthur struggling to put his duvet away after sleeping in a living room hours before his death.

By June 16 last year the six-year-old was so frail he could barely pick his bedding up from the living room floor – where he had been sleeping – a jury has heard.

Police outside a home on Cranmore Road in Shirley, Solihull, West Midlands, where Arthur Labinjo-Hughes, six, was found injured on 16 June 2020 and died in hospital the next day
(

Hours later he would collapse of catastrophic and ultimately fatal head injuries.

Previous : Toronto police failed to notify the SIU about the beating of Dafonte Miller, external review finds
Next : Bobbi-Anne McLeod: Body found as murder probe launched and 2 arrested in hunt for teen