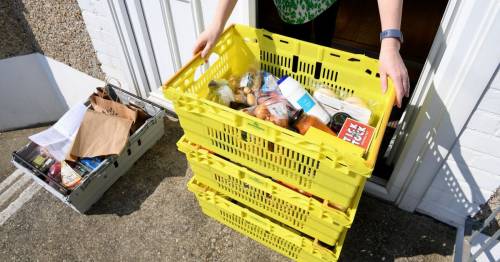 A list of industries that can apply to be exempt from Covid 'ping' isolation will be produced today, the Business Secretary has declared.

Kwasi Kwarteng tried to calm fears about an explosion in people being told to isolate in England due to contact with the soaring number of Covid cases.

There have been anecdotal reports of empty shelves in shops as the food supply chain comes under strain.

But there was confusion this morning about exactly how the list would work.

Downing Street previously stressed there would not be a single "list" of workers exempt automatically – and instead firms would have to apply to government departments on a case-by-case business.

Today, however, Mr Kwarteng said: "We're going to come up with a list of exempt workers very soon" and "I don't think it's a question of applying for this".

Sources later appeared to clarify it would still be a list of industries where firms can apply – not a list of workers that can isolate automatically. And Mr Kwarteng said: "We're looking at different sectors and we will be publishing today the sectors that will be affected."

"We’re looking at different sectors and we will be publishing today all the sectors that will be affected," he told the BBC.

He insisted list of fully-vaccinated critical workers exempt from isolation will be "very narrow", "because we don't want to get into a huge debate about who is exempt."

He refused to say if it would include lorry drivers.

"Clearly in some places that is happening… I don’t think it’s universal across the country.”

Some reports have emerged of firms ignoring 'pings' from the Covid-19 app – which is an order to isolate but is not legally binding, whereas Test and Trace orders are.

"The rules are clear and I think they should be followed," Mr Kwarteng said.

He also contradicted his junior business minister Paul Scully, who earlier this week said it was a decision for individuals and employers whether they should isolate after a "ping" from the NHS Covid-19 app.

"I'm not going to countenance people breaking the rules or anything like that. I think they should just follow them."

Downing Street refused to rule out some supermarket workers being included if they are essential to the food or medicine supply chain.

Boris Johnson added earlier this week: “We will protect crucial services including the staffing of our hospitals and our care homes, the supplies of food, water, electricity and medicines, the running of our trains, the protection of our borders and the defence of our realm, by making sure that a very small number of named, fully vaccinated, critical workers are able to leave their isolation solely for the work I have described.”

Exempt people will only be allowed onto the scheme in "exceptional circumstances" – and even then can only go to work, not anywhere else.

They will only be allowed into work if "there would otherwise be a major detrimental impact on essential services".

They must take an initial PCR test then daily lateral flow tests and if they test positive, will have to isolate.

Previous : How Priti Patel’s violence against women strategy fails women
Next : Horsefly bite: How to tell if you’ve been bitten and how to treat painful bites