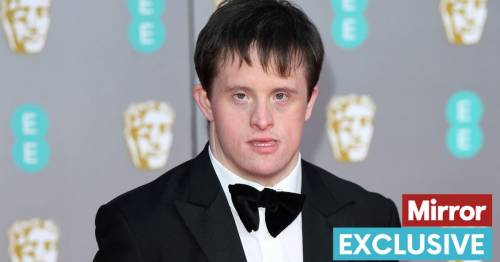 Line of Duty actor Tommy Jessop, who has Down's syndrome, has called for more diversity on screen when it comes to representing disabled people.

Tommy, from Hampshire, made the comments as it was announced that he is the latest Ambassador for Mencap – a UK learning disability charity.

The 36-year-old, who played Terry Boyle in the hit BBC crime drama, spoke exclusively to The Mirror ahead of the announcement today.

On Zoom, he said he had 'always' wanted to be an actor after starting out with local theatre company Blue Apple Theatre, which was founded by his mother Jane.

"I always wanted to be an actor because I do enjoy making people feel their emotions, making them laugh, cry, shout and swear all for the love of it on a screen," he exclusively tells the Mirror.

The TV star is keen to use his position to push for more diversity and hails his time appearing in nailbiting drama Line of Duty as 'incredible.'

Describing the scene where his character is nearly drowned in a lake, he found himself freezing cold in mid-November at midnight standing by the water.

Comparing it to a James Bond scheme, the actor says he had a ball filming the gripping drama, especially the interrogation scenes.

Rather sweetly, his mum Jane was included in the final episode – playing the social worker taking Terry to a safe house after the dramatic ongoings.

He's keeping details about a rumoured next season quiet but adds that he hopes he appears in it if it does return.

Although he admits: "If I'm not in it, I will enjoy putting my feet up and watching it."

He has made his TV debut in Holby City and went on to be the first professional actor with Down's syndrome to play Hamlet, in a performance that Sir Mark Rylance hailed as 'phenomenal'.

And he thinks that representation is 'improving', but there's much more to do.

Asked what advice he would give actors with Down Syndrome who are hoping to follow in his footsteps, he says: "Live your life to the full.

"Be professional, be punctual and have an early night so that you really are on top form. The best part is having fun."

Tommy says there’s still much progress to be made
(

Tommy is also the winner of various Best Actor awards for his short films and also the first professional actor with Down’s syndrome to become a full voting member of BAFTA.

Asked about representing Mencap, he said: "I really do feel honoured and proud to represent Mencap because I really would like to be a voice for the 1.5 million people in the UK living with a learning disability.

"It is a bit daunting and overwhelming because we are all different but it is quite a brilliant chance to make a difference.

"I do hope to stop people saying that people with learning disabilities cannot do certain things.

While playing Terry, he was taken in for questioning in Line of Duty
(

"I want other people to say 'yes you can', because we will help you.' We are not all the same. We don't all have the same chances in life, but I do want people to understand we can do things.

"We should be able to lead healthy and happy lives and do interesting things like go to work, get married and choose who we live with, just the same as other people.

"The main message is: just give us a chance."

In July 2021, Jessop received an honorary Doctorate of Arts from the University of Winchester for his services to the entertainment industry.

Tommy at the NTA's with the Line of Duty cast
(

The research also revealed that a third (33%) of people in the UK say they would feel more comfortable talking to someone with a learning disability if they saw them featured more often in the media.

Speaking of his new role as Mencap Ambassador, Tommy says: "I am proud and honoured to be a Mencap Ambassador. I hope through this role I can help Mencap keep doing what they do best to carry on their really hard work in the future.”

Edel Harris, Chief Executive of the learning disability charity Mencap, said: “ We are delighted to welcome Tommy Jessop as our Ambassador.

"Like the rest of the nation, I was gripped by the last season of Line of Duty and was delighted to see someone who has Down’s syndrome on such a popular and prime time TV show.

“Having Tommy on board as an Ambassador is a great way to de-stigmatise and challenge misconceptions about people who have Down’s syndrome and/or who have a learning disability.

"He will also help us increase the visibility of people with a learning disability across the media and society to help transform attitudes.

"Our vision is for the UK to be the best place in the world to live a happy and healthy life if you have a learning disability and I look forward to working alongside Tommy to make this vision a reality."

Previous : Robert Durst: Millionaire who ‘dismembered pal & accidentally confessed to murder’
Next : Thousands demand 5ft bus driver gets job back after she was fired for being too small