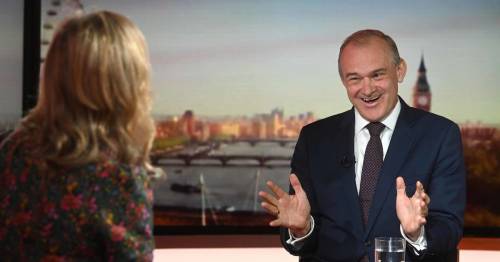 The Liberal Democrats have not ruled out joining a coalition with Labour in the next general election.

Sir Ed Davey refused to explicitly stamp out questions about entering into coalition with Labour but said he was focused on holding "this wretched Government to account" rather than eying the next election.

A Labour source said: "We’ve always said no deals and no pacts. We want a Labour government."

The Lib Dem leader faced questions on whether his party would join forces with Keir Starmer after the Tories took a hammering at the polls.

Analysis for Sky News by election expert Professor Michael Thrasher suggested Boris Johnson would be stripped of his Commons majority and lose nearly 90 seats if local election results were replicated in a national ballot.

Boris Johnson lost hundreds of councillors at the local elections
(

The Lib Dems gained 222 councillors in the local elections and were buoyed by successes in the Tories southern heartlands.

It was a bruising night for the Conservatives, who lost nearly 500 council seats, while Labour boosted their numbers by 115 and seized three totemic Tory councils in London, as well as newly formed Cumberland in the north west of England.

Asked if his party would enter into a coalition with Labour at the next election, Sir Ed said: "You're asking me to think about two years ahead, two and a half years ahead, and as I said earlier I'm not going to take voters for granted.

"I have a job to do and that's to hold this wretched Government to account on their appalling economic measures."

Pressed to answer the question, he said: "It's a hypothetical, come on it's two years ahead."

Asked again if he would be prepared to enter a coalition, he said he was "ambitious" for the Liberal Democrats and he wanted to make sure that the Tories were ousted.

Pressed on how he would enter Government without a pact with Labour, he said his party was optimistic it could "topple lots of Conservative MPs, adding: "What comes after that can frankly wait."

Asked a fifth time if he would consider it, he said: "I'm considering about how we hold this appalling Government to account and how we defeats Conservative MPs at the next election."

Both Labour and the Lib Dems denied recent claims by Tory chairman Oliver Dowden of a secret agreement to inflict pain on the Conservatives at the local elections.

Keir Starmer would be unlikely to agree to an official deal but there has also been speculation of non-aggression pacts between the parties in recent by-elections.

Meanwhile, Deputy PM Dominic Raab admitted he faced a battle to see off the Lib Dems in his Esher and Walton constituency.

Asked if there was a risk he could lose his seat to the Lib Dems, he said: "Look, it's going to be a tough fight for me in my seat."

Previous : How Camilla helped Meghan Markle during royal wedding – and her order to Charles
Next : Sinn Fein sweeps to victory in Northern Ireland in ‘election of a generation’