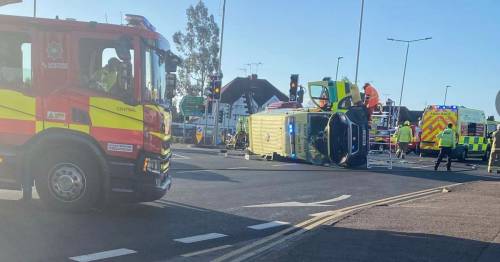 An ambulance has overturned after a serious early-morning crash with a car.

Photos from the scene show the emergency vehicle having toppled onto its side in the middle of Leicester road near a Tesco supermarket.

A silver car, with a caved in bonnet, is also seen close by having rammed into a set of traffic lights, which have been left at an angle, reports LeicestershireLive.

Drivers are being diverted and there is heavy traffic.

Police have warned motorists to avoid the area, with Welford Road closed at Asquith Boulevard junction.

The force confirmed the road is closed city-bound towards the Tesco Express in Lutterworth Road.

At 6.30am today, Leicestershire Police said: "We are dealing with a police incident on Welford Road/Asquith Boulevard junction. Please avoid this area. Updates will follow. Thank you for your patience."

Drivers are being diverted and there is heavy traffic
(

A follow up message gave an exact location of the incident: "Road closure from Welford Road from the main Asquith Boulevard to Tesco city bound."

Leicestershire Police, Leicestershire Fire and Rescue and East Midlands Ambulance Service are all at the scene dealing with the incident.

Pratik Master, owner of Wigston Deli in Carlton Drive, said there is standstill traffic in the area, leading back for 30 minutes. He said he witnessed the aftermath of the crash on his way to work.

He said: "I saw the ambulance overturned on its side – just hope the people inside are ok."

Traffic app, Inrix, reported the incident earlier this morning – advising how long the closure is set to be in place.

It said: "A563 Asquith Way in both directions closed, slow traffic due to police incident from A5199 Welford Road to Shackerdale Road.

"Closure will be in place for most of the morning."