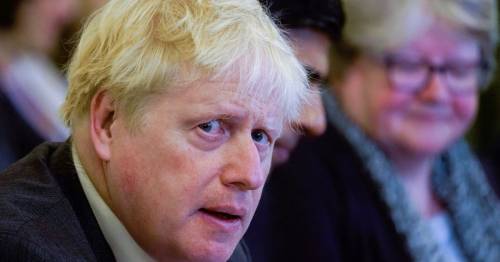 Lawyers have received death threats after Boris Johnson claimed they were "abetting criminal gangs" for refusing to back his "unlawful" policy.

The Prime Minister has been urged to apologise to legal professionals who have found themselves facing a barrage of "bullying".

The first flight to Rwanda was grounded on Tuesday following a series of legal challenges in the High Court, Court of Appeal, Supreme Court and European Court of Human Rights on behalf of the asylum seekers due to be sent on the one-way trip to Rwanda.

Hours before the humiliating turn of events for the Government, the PM acknowledged mounting criticism of the plan but suggested it was mostly from lawyers.

At a Cabinet meeting on Tuesday, Mr Johnson said: “They are, I’m afraid, undermining everything that we’re trying to do to support safe and legal routes for people to come to the UK and to oppose the illegal and dangerous routes.”

A jet sat at a military base in Salisbury on Tuesday, braced to take asylum seekers to Rwanda
(

Mr Johnson has since been accused of “bullying” lawyers and “whipping up hatred” over the controversial scheme that could not go ahead on Tuesday.

Mark Fenhalls, the chair of the Bar Council urged the Prime Minister to “clarify his remarks”, after learning lawyers had faced threats to their life.

Speaking to Times Rado, Mr Fenhall said: "I think it’s a bit galling when elected politicians make completely unwarranted and unfair attacks and seek to undermine the rule of law in the way that’s been done this week."

"What appears to be going on is a pattern of attacking lawyers who are maintaining arguments in relation to policy that the government doesn’t like, and it’s a form of bullying," he added.

The PM’s spokesman told the Mirror: “The Prime Minister is firmly of the view that all those in our legal profession, play a vital role in our democracy and any sort of abuse or harassment is utterly unacceptable.

“We expected this to be challenged in the courts and that is what’s happening. Now people are able to bring these challenges and I’m sure we will be able to see this continue.

"The Government is able to robustly defend its decision in the courts and in public on these issues.

“I haven’t asked the PM specifically he is of the view that it is only criminal gangs that benefit from this, the longer we allow these crossings to take place without a proper solution.”

Previous : Single mum ‘terrified’ by energy price cap going up as it gets colder in winter
Next : Strikes ‘not easy to organise’ and need ‘burning sense of injustice’, says union boss