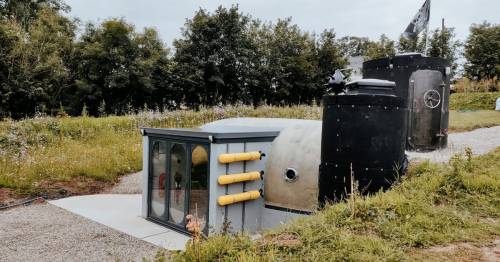 The last remaining UK sonar hull from a Navy relic, an HMS Destroyer, has been salvaged and transformed into a quirky glamping pod.

The owner of Apple Camping, Toby Rhys Davies, forked out £50,000 to convert the 50-year-old hull into a luxury staycation abode at his campsite in Redberth, South Wales.

The dome, which was built to detect rival u-boats and submarines using sonic waves, is the last of its kind in British ownership. The others of its kind are sat at the bottom of the sea or in foreign territories.

Toby said the hull was the spare – the only one that wasn’t actually active on a boat.

“The others were on HMS Sheffield and HMS Coventry but both of those are sitting at the bottom of the ocean,” he said.

“The third one is still floating around but it’s owned by the Argentines so this is the last remaining sonar hull of its kind in the UK.”

The Type 42 HMS destroyers was a class of fourteen guided missile destroyers that were first ordered in 1968 and launched in 1971.

The vehicles, which were also known as the Sheffield class, were first ordered in 1968 and launched in 1971.

The hull's new home is at Toby's camping site in Redberth, South Wales
(

They were used for some 38 years by the Royal Navy, before they were replaced with a new model, the Type 45 destroyers.

After it narrowly dodged active service in the Falklands War, Toby salvaged the sonar hull in November last year when a friend with naval connections suggested he might be able to put it to good use.

The glamping site owner has a name for turning disused vehicles into accommodation; he has previously made headlines for his conversion of a former Etihad airbus and a 1970s Jetstar into two other luxury stays.

After Toby acquired the sonar hull in November last year, the project took eight months to complete, costing £50,000. The hull’s first guests snagged the opportunity to stay in August.

Toby said he had been on holiday when he received a call from someone connected with the Royal Navy, who said he had acquired the hull and thought Toby may be interested.

Toby had already planned to do “something underground” – he had originally thought about creating some kind of hobbit house – but when he saw the sonar hull he said it was better than anything else he had looked at.

“The shell of this thing is absolutely solid, it was built to withstand bombs so it was a bit of a task making some alterations to make it liveable,” he said.

“We spent three weeks with disc cutters just trying to shape it and take bits off it and we broke several tools trying to make port holes.

Now the three-bed subterranean pod is finished with a kitchen, bathroom, and even has underwater light and sound effects to complete the atmospheric stay.

Toby said: “People are absolutely loving it and parents are going as mad for it as their kids.

“We had one couple decide they were staying inside and put the kids in the tents outside.

“There’s so many rewarding little features like the periscope effect holes that look out onto the flower meadow, the old diving gear decor or the sonar sound effects as you descend down into the hull on the spiral staircase.”