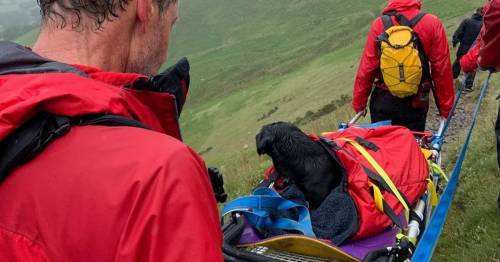 Labrador had to be rescued after falling off side of 3,000ft mountain

A Labrador who fell off one of England's highest peaks was saved by a 12-strong rescue team.

The dog tumbled "some distance" from the Scales Tarn side of Sharp Edge at the top of Blencathra, which towers almost 3,000 feet above the Lake District and is also known as Saddleback due to its appearance.

At 12.40pm yesterday (June 17), 10 members of Keswick Mountain Rescue Team and two from Penrith were called to the scene.

They worked for two hours to free the canine and carried him to safety on a makeshift stretcher down the mountain-side as rain started to fall, LancsLive reports.

Once in the car park, the owner took the dog to the veterinary practice in the nearby town of Cockermouth for further checks and treatment.

Keswick Mountain Rescue Team said: "The team received a report of a Labrador that had fallen some distance off the Scales Tarn side of Sharp Edge.

"The dog’s owner, as well as a couple of Penrith MR team members, who were in the area, went to assist and improvised a stretcher to carry the dog down to the path."

Sharp Edge is a notoriously difficult climb, with experienced climbers calling it more of a scramble.

On the mountain rescue's Facebook page followers had thanked them for their heroics.

Susannah French added: "Striding Edge is doable by a fit experienced lab, but Sharp Edge has always been a day when the dog stays home."

But Caroline Broom said: "All these people criticising the person taking a dog, a dog is better equipped than us for these type of walks.

"Look at sheep and goats hence why people use the nickname mountain goat.

"Dogs can enjoy the fells and edges just as much as us.

It wasn't the only animal rescue the Keswick team were involved in yesterday.

At midday, 11 team members spent just under two hours rescuing a woman and her dog who found themselves stuck on a ledge after following the wrong path at Shepherd's Crag in the Borrowdale Valley.

They said: "Both were uninjured but as they were unable to continue on or down-climb the way they had come, the woman wisely decided to call Mountain Rescue.

"The team helped the woman to walk off using a back-up safety line on the steeper sections, while her dog was assisted close behind.

"Once safely back at the road they both decided to return to their nearby accommodation for rest and recovery."