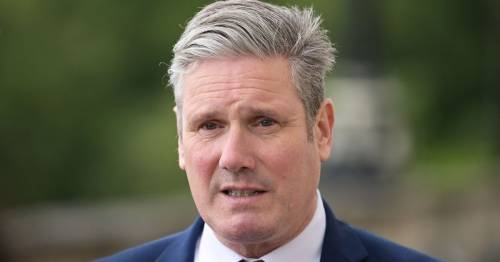 Labour has been drawn into the rail strikes row as front benchers have been told to stay away from picket lines.

The full memo, seen by Politics Home, said: "We have robust lines. We do not want to see these strikes to go ahead with the resulting disruption to the public. The government have failed to engage in any negotiations."

But the Mirror understands only top members of Mr Starmer's cabinet had received the message.

One Labour frontbencher told the Mirror: "I can only follow instructions I receive".

She said: “I’m a trade unionist, I will always stand on the side of the workers.”

Labour MP Kate Osborne at the picket line this morning
(

Labour whip, Navendu Mishra, also defied marching orders, as he tweeted: “As a proud trade unionist, I stand with all workers on our railway network who are taking industrial action to fight for their jobs & keep passengers safe.”

The Mirror understands Labour's chief whip will decide how shadow front benchers, who defied Mr Starmer's orders, will be disciplined once the strikes are over.

A Labour spokesperson told the Mirror: “Unlike the government, our focus is firmly on the public. The Tories are in charge, and they failed to fix it.

"The responsibility for this week’s chaos lies firmly with them. Boris Johnson and Grant Shapps must u-turn on their refusal to even meet with Network Rail and the RMT to urgently find a solution.”

Labour has been criticised by the unions for not showing support to public sector workers, given its historic union ties.

Sharon Graham, general secretary of the Unite union said: “The Labour Party was founded by the trade unions and we expect Labour MPs to defend workers, by words and by actions.”

Manuel Cortes, general secretary of the Transport Salaried Staffs’ Association, whose members have already balloted for strike action later this year, said: “This is ridiculous nonsense from the party which was created by trade unions.

"Solidarity is what our movement is all about.”

But shadow Treasury chief secretary Pat McFadden said he understood why the RMT was pressing for a pay rise due to the rising cost of living, but that he wants to see a negotiated settlement.

Asked what his message to Labour MPs who do join the protests would be, Mr McFadden told LBC News: “I would say to them, in the end that’s not how this will be resolved.

"It will be resolved by a deal that gets the railways running again, and that’s where the political focus should be.”

Tory ministers have continued to lash out at the unions, as they confirmed plans to replace employees with temporary staff in fear of future strikes.

Britain is braced for a so-called "summer of discontent" as workers facing a cost of living crisis threaten to go on strike over pay.

The Government has responded by saying it will bring in a new law that lets agency staff do the jobs of employees who withdraw their labour.

Boris Johnson speaks at the start of today's Cabinet meeting
(

The new law is likely to come into force in mid-July and would not hit rail strikes due to take place this week.

She told MPs: “The same Transport Secretary that just a few short weeks ago was feigning outrage over the disgraceful behaviour of P&O and who is now adopting their playbook.

Boris Johnson has urged train passengers to “stay the course” in the face of the “unnecessary aggravation” caused by rail strikes.

The Prime Minister told a meeting of the Cabinet that reforms are vital for the rail industry and those who work in it.

As 40,000 workers prepared for Tuesday’s strike, the most wide-reaching on the railways in 30 years, Downing Street brought forward changes to enable employers to replace employees with temporary staff.

Mr Shapps told Sky News' Kay Burley that nothing could be done to "change the reality" of the strikes that are taking place on Tuesday, Thursday and Saturday this week.

But he added: "For future strikes… we are going to ensure that the law is firmly on the passengers' side, on the consumers' side."

RMT union chief Mick Lynch criticised the proposed change in the law, which would allow flexible workers, including agency staff, to cover for those on strike.