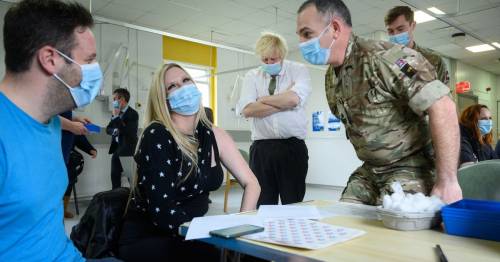 Labour today declared Boris Johnson is “not fit to lick the boots of NHS staff” in a furious Commons clash.

Shadow Health Secretary Wes Streeting hit out after the Prime Minister admitted he spent 25 minutes at a No10 staff garden party in the first lockdown.

And he clashed with Health Secretary Sajid Javid, who was in Parliament to announce the Covid isolation period in England will be cut to five full days from next Monday.

Mr Javid accused his Labour rival of saying "not one word of thanks" to NHS staff adding: "It will be noted by the British public."

Furious Mr Streeting stood up and said: “I’m not sure that’s in order.

“The Prime Minister is not fit to lick the boots of NHS staff in this country."

“The Prime Minister is not fit to lick the boots of NHS staff in this country," said Wes Streeting

He was told off by deputy speaker Nigel Evans, who told him: “We won’t have that again, please.”

It comes after Boris Johnson apologised but bizarrely claimed he thought the May 2020 “bring your own booze” bash – while outdoor gatherings in gardens were banned completely – was a work gathering.

Top Tories including the party’s Scottish leader have demanded the PM quit, with others keeping their counsel until a report from civil servant Sue Gray is published – possibly next week.

Labour MP Mr Streeting said: "It's the silence that should worry Boris Johnson … the silence behind him on the Conservative benches and in the corridors.

"That wasn't an apology. It was the most shameful performance by a Prime Minister in the House of Commons in living memory."

Mr Streeting mocked the “terribly unfortunate coincidence of timing” in Mr Johnson cancelling a visit due to a close member of his family – either Carrie or his two children – testing positive.

And he said Deputy Chief Medical Officer Jonathan Van-Tam’s decision to step down recalled a tweet by the UK Civil Service four days after the May 2020 party.

The tweet said: “Arrogant and offensive. Can you imagine having to work with these truth twisters?”

Mr Streeting said: “JVT already has a knighthood, but working with the Prime Minister he must have the patience of a saint.”

Earlier Mr Javid had paid tribute to the top medic, saying: “There aren't many clinical advisers who can be recognised solely by three letters, but JVT's unique and straightforward approach to communication has seen him rapidly become a national hero.

"To use words that I think he might particularly like, we're grateful that we've had him on loan for so many years. He's been a top signing and he's blown the whistle on time."

"JVT already has a knighthood, but working with the Prime Minister he must have the patience of a saint"
(

After Mr Streeting’s comments on NHS staff, Mr Javid replied: "Again, he had another fresh opportunity to thank the NHS, for the enormous work they have been doing, not just throughout the pandemic, but in December, especially for everything they have done to boost so many people."

Later in his response, the Health Secretary responded to Mr Streeting's claims that the UK Government had "misread the policy of the Biden administration" on a shorter isolation period.

The UK Health Security Agency faced fury on the weekend after correcting the detail of its claims, after saying the UK and US approaches could not be compared like for like.

Mr Streeting added: “How many days does he think the NHS has lost, the economy has lost, because they couldn’t read the policy being used in the United States?”

Mr Javid said: "He does have to decide – does he want these decisions made here in the UK based on expert UK advice, with some of the best advisers anywhere across the world?

“Or does he want to subcontract it again to another state?"

His political future remains on a knife edge as the apology failed to quell mounting anger, with several senior Tories breaking ranks to call for his resignation.

Mr Johnson is said to have hit the Commons tearooms after his apology on Wednesday to woo Tory MPs – where some were surprised by his lack of contrition.

The PM told colleagues that “we have taken a lot of hits in politics and this is one of them”, according to The Times.

"He goes through his life thinking he doesn’t deserve the blame.”

A damaging rift opened with the Scottish Conservatives when leader Douglas Ross broke ranks to say the PM's position was "no longer tenable".

He was backed by a string of Scottish MSPs, and three senior Tories in Westminster, including ex-minister Caroline Nokes.

He told Today: "I haven't heard that at all. I wasn't in the tearoom yesterday so commenting on tittle tattle that may have come out the tea room, I can't do that."

But he insisted that PM's apology was "very, very sincere".

Previous : Cruel couple let their scab-covered dog rot to death in flea-infested home
Next : Gina Miller announces she will run for Parliament – ‘I have to lead by example’