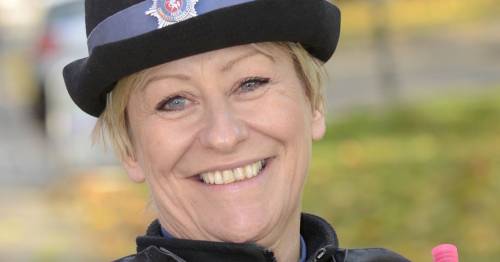 An off-duty PCSO was “ambushed” out walking her dog by a killer who had been “waiting in the woods” for a victim, a court heard.

Grandmother Julia James, 53, suffered catastrophic head injuries in the “brutal and fatal attack” and “died where she fell” as she walked her beloved Jack Russell Toby, a court heard

Her body was found lying face down with her hood pulled up over her head in woods near her home in Snowdown, Kent, on April 27 last year.

It is alleged she had been battered to death with a large metal railway jack.

Jurors at Canterbury Crown Court were told on Monday that Callum Wheeler, 22, from Aylesham in Kent, accepts that he killed her but denies murder.

Prosecutor Alison Morgan QC told them: "The evidence suggests that her attacker was waiting in the woods for someone to attack and then ambushed her.

"Julia tried to escape her attacker but she was subjected to a brutal and fatal attack.

"She suffered catastrophic injuries and died where she fell."

In her opening statement, she told the jury that the woods were “very familiar” to the defendant, who had been seen several times in the area.

And Julia James had seen her alleged killer in the woods before, having spotted him on a walk with her husband Paul in February 2021.

Ms Morgan said: "She would often walk to a place that was of particular personal significance to her, which she knew as 'butterfly corner'.

"In the months before the attack, he was someone who had been seen by a number of witnesses during the daytime walking around the local area.

"Julia James was herself aware of the presence of a strange male in the area of Ackholt Wood.

"She commented to her husband that she had passed someone she described as 'a really weird dude' on the Ackholt Wood path."

Her husband, Paul, was walking with her last February when she pointed the man out to him "just metres away from where [she] would be killed", said Ms Morgan.

Previous : Teacher’s Pet murder trial – the teacher, his wife and the schoolgirl he moved in – World News
Next : Sick paedophile raped and abused three girls – forcing one of them to drink weed killer