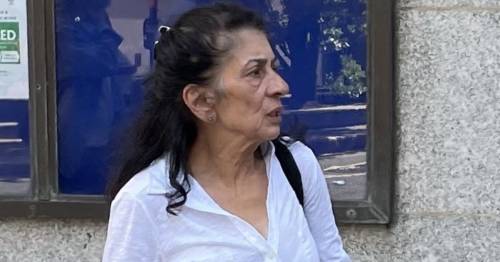 Killer got mum, 70, to help dispose of victim’s body by setting it on fire in bushes

A killer is facing jail with his 70-year-old mother after she was convicted of helping him get rid of his victim's 6ft 7in body.

Loeike Guei's burning corpse was discovered by a cyclist riding past Mitcham Common, south London, at roughly 6am on September 17 2020.

Raphael Kokkinos, 34, admitted killing Mr Guei, 23, at his flat in Streatham and perverting the course of justice by disposing of his body.

Kokkinos' mother Sophia, 70, denied but was convicted of perverting the course of justice by an Old Bailey jury by a majority verdict of 10-to-one after more than 35 hours of deliberation.

Aaron Williams, 29, was unanimously convicted of perverting the course of justice, by helping Raphael dispose of the body.

But Raphael's disabled brother Joseph Kokkinos, 32, and Michael Brain, 29, were cleared of the charge.

Benoni Thomas, 38, who was allegedly present at the flat at the time of the killing, denied and was cleared by the jury of manslaughter.

Kokkinos' mother Sophia, 70, denied but was convicted of perverting the course of justice by an Old Bailey jury by a majority verdict

Raphael will face sentence with Sophia and Williams on a date to be fixed next month.

A night shift worker drove past Mitcham Common in the early hourse when he saw a small fire burning in some bushes by the side of the road, but saw nothing amiss and carried on.

"He too could see that something was on fire, but unlike the motorist he stopped and went closer to see what it was.

"And so it was him, the cyclist, who made a gruesome discovery: what was on fire was a dead man's body."

The victim turned out to be Mr Guei, who had been killed two days earlier in the nearby home of Raphael Kokkinos.

"The prosecution case is that Mr Guei was killed by Raphael Kokkinos.

"There was only one other person with Mr Kokkinos at home when Mr Guei paid him a visit.'

The prosecutor said Thomas had fled the flat and left London after the killing.

"That left, as you can probably imagine, Raphael Kokkinos with a problem – he had a dead body to get rid of.

"He plainly decided that he was not going to involve the authorities and phone the police or phone for an ambulance.

"What he did instead was he recruited his friends and family to help him with his problem,' said Mr Emlyn Jones.

"Over the course of a little under 48 hours, they between them got rid of Mr Guei's car, in which he had arrived at the address where he was to be killed.

"They got rid of his mobile phone; they cleaned the place up.

"Ultimately they got Mr Guei's body out of the address, into a car, and in the middle of the night took the body to Mitcham Common, dumped it and set it on fire.

"They even, perhaps as a final humiliation, partially stripped Mr Guei, so that when he was found, dead and on fire, his underpants had been pulled down around his thighs."

Raphael Kokkinos had admitted killing Mr Guei, getting rid of evidence and disposing of the body but the prosecutor added: 'The question is: who helped him?

"Who did he do it with? He couldn't have done it without their help."

Thomas, Hardwick, Cambridge, denied and was cleared of manslaughter.

Sophia Kokkinos, Clapham, southwest London, and Williams, of St Alphonsus Road, Clapham, denied but were convicted of perverting the course of justice.

Joseph Kokkinos, also of Chelsham Road, and Brain, of The Grove, Bexley, southeast London, denied and were both cleared of perverting the course of justice.

Previous : Polio will paralyse unvaccinated child if allowed to spread in UK, expert warns
Next : Man who died after being Tasered by police was ‘beloved son, brother and friend’