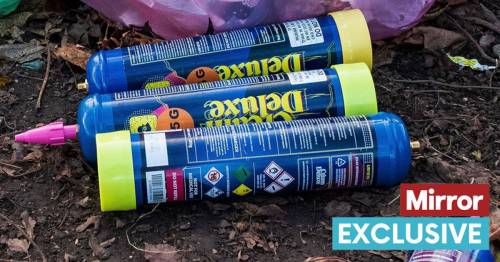 The laughing gas epidemic is now so rampant that kids are buying it in industrial-sized containers.

Dozens of deaths have been linked to the craze for inhaling nitrous oxide, which is used by dentists to sedate patients.

Now litter pickers are finding containers that can fill 70 balloons – used to inhale the gas.

One was discarded days ago at a play area in New Eltham, South East London. Another was found in Bolton.

The £35 units are legal as the gas is used in whipped cream.

Prof Harry Sumnall, an expert at Liverpool John Moores University, said: “Canisters of this size are increasingly being found. Their availability means it’s potentially easier to be exposed to large amounts.”

Nitrous oxide, dubbed hippy crack, was named on 42 death certificates between 2010 and 2019. Overuse can cause nerve damage, suffocation, paralysis and death.

The Government is considering bringing it under the scope of anti-drug laws.

Around half a million young people said they had taken it in a recent survey.

Deaths linked to the drug include that of Rory Wai, 18, who was found dead in bed days before he was due to receive his A-level results in Wivenhoe, Essex.

The Countryside Alliance said: “Discarded hippy crack canisters are a massive blight. Banning them will help go some way to addressing this.”

Previous : Tsunami advisories issued for parts of B.C. as undersea volcano erupts in Pacific
Next : How to stop burglars using inventive new technique to break into homes and vans