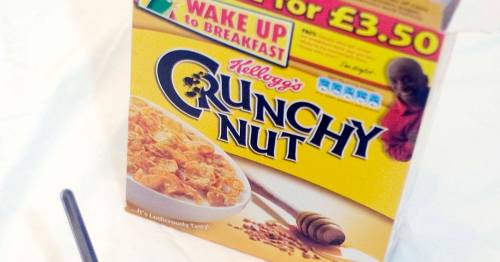 Kellogg's is launching legal action against the Government over new rules that would stop some of its cereals being displayed prominently in stores.

New restrictions aimed at limiting the promotion of food and drink that is high in fat, salt and sugar are due to come into force in England this October.

The Government says the new rules will help tackle childhood obesity and wants healthy snacks to be at the forefront of store advertisements.

But Kellogg's argues that the restrictions fail to consider the nutritional value of the milk added to its products.

A report on the BBC website states that Crunchy Nut and Fruit and Fibre are two Kellogg's brands that are considered to be high in fat, sugar or salt in their dry form.

However, adding milk would reduce the proportion of sugar and salt content in relation to the overall weight of the serving.

What do you think about the new obesity rules? Let us know your thoughts in the comments below.

Kellogg's said in a statement that it has "tried to have a reasonable conversation with Government" without success.

A hearing will take place at the Royal Courts of Justice in London.

Chris Silcock, the company's UK managing director, said: "We believe the formula being used by the Government to measure the nutritional value of breakfast cereals is wrong and not implemented legally. It measures cereals dry when they are almost always eaten with milk.

"All of this matters because, unless you take account of the nutritional elements added when cereal is eaten with milk, the full nutritional value of the meal is not measured."

"Restricting the promotion and advertising of less healthy foods is an important part of the cross-government strategy to halve childhood obesity by 2030, prevent harmful diseases and improve healthy life expectancy, so we can continue to level up health across the nation."

The spokesman added that obesity costs the NHS more than £6 billion a year and is the second biggest cause of cancer in the UK.

The changes to how food is advertised from October has also seen Nando's confirm a huge change to its refillable drinks station.

At the moment, Nando’s diners can get unlimited refills of fizzy drinks, including Coca-Cola, Fanta and Sprite Zero.

But from October, the Peri Peri chicken chain will no longer offer unlimited top ups of classic Coca-Cola.

Previous : Sadiq Khan sets up new body to look at whether cannabis should be decriminalised
Next : Mum who took out ‘useless’ phone insurance wins £720 after paying for two years