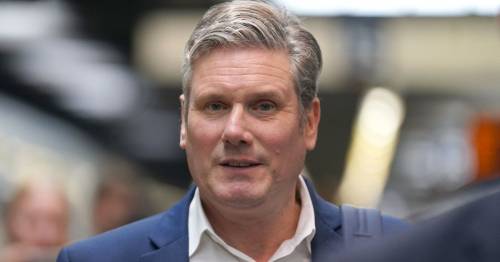 Keir Starmer has vowed he will quit as Labour leader if he is fined by Durham Police over Beergate.

In a high-stakes attempt to regain control, Mr Starmer tied his future to the results of the police investigation – in a stark contrast with the law-breaking Prime Minister.

Mr Starmer said he was "absolutely clear no rules were broken" but added: "If the police decide to issue me with a fixed penalty notice, I would of course do the right thing and step down."

The Labour leader has faced questions about his future as allegations mounted over his visit to Durham last year while campaigning in the Hartlepool by-election, when he was pictured drinking a beer and a takeaway curry with campaigners.

Covid rules at the time banned indoor gatherings but there were exemptions for work purposes. Political campaigning was also permitted ahead of the elections.

In a statement at Labour HQ, Mr Starmer said he had always followed the rules throughout the pandemic – and accused his critics of cynical attempts to tar all politicians with the same brush after Boris Johnson was found to have broken his own lockdown rules.

"We are not all the same. I am different. and I've set out today how I'm different," he said.

"The idea that I would then casually break those rules is wrong. And frankly I don't believe those accusing me believe it themselves.

"They are just trying to feed cynicism to get the public to believe all politicians are the same."

Asked if people within the Labour Party were trying to undermine him, the Labour leader said: "This is my decision about what is the right thing to do in these circumstances.

"No rules were broken. I've said that with great clarity.

"But this is about me, it's about what I believe in in politics.

"It's about integrity and I believe in integrity and integrity requires me to take the course of action I've set out here in the event I get a fixed penalty notice."

The move piles pressure on Boris Johnson after he was fined by the Metropolitan Police over his own surprise birthday gathering in Downing Street in June 2020.

Chancellor Rishi Sunak and the PM's wife Carrie both received fines from the Met over the same event.

Both men have refused to quit despite breaking the laws their Government imposed on the public.

Mr Starmer has taken a tough stance over the law-breaking in Downing Street, which puts him in a difficult position is he is now fined.

Durham Constabulary initially reviewed the footage when it emerged in February but said it would take no further action.

But cops last week dramatically U-turned on Friday, saying they had received “significant new information” which had prompted them to reopen the case.

Durham police did not say what this information was but The Times reported that the news that deputy leader Angela Rayner attended the evening was key.

Labour originally denied she was present before conceding this had been a mistake.

Mr Rayner issued a statement saying she would also resign if she was handed a fine.

She said: "I’ve always been clear that I was at the event in Durham working in my capacity as Deputy Leader and that no rules were broken.

"Eating during a long day’s work was not against the rules. We have a Prime Minister who has been found to have broken the rules, lied about it and then been fined.

"If I were issued with a fine, I would do the decent thing and step down."

Hannah Brady, spokesperson for Covid-19 Bereaved Families for Justice, said: "This is the right decision by Keir Starmer and in contrast to Boris Johnson, shows integrity, decency and respect to the bereaved.

"At the end of the day the country can’t be led by someone who's been fined for breaking lockdown rules.

"The pandemic isn’t over, and if, God forbid, a new vaccine resistant strain should emerge, it’s essential we have a leader with the moral authority to introduce restrictions if needed. If we don't, lives could be lost as a result."

She urged Conservative MPs to "do the decent thing" and remove Mr Johnson from power.

Previous : 10,000 firms back Real Living Wage – but 4.8 million workers still paid below threshold
Next : NCAA Division I Board of Directors releases new NIL guidelines regarding involvement of boosters