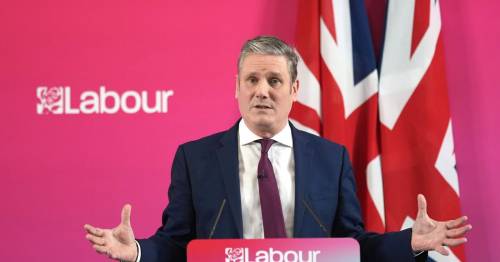 Keir Starmer has urged Labour frontbenchers to get leadership campaigns ready in case he is forced to resign over Beergate, according to reports.

The Labour leader told Wes Streeting and Lisa Nandy, two leading politicians tipped to replace him, they should prepare bids for the top job, a report in the Sunday Times said.

According to the paper, he has told moderates within the party that they must make plans to run and keep his post-Jeremy Corbyn reforms of the party.

It comes after he and deputy leader Angela Rayner, who have both said they will resign if they are found to have breached lockdown rules, returned their questionnaires to Durham Police on Friday.

The force reopened its investigation into whether rules were broken by the two politicians while they were in the area campaigning in the Hartlepool by-election.

One friend of Mr Starmer's said that the leader reportedly told colleagues: “I will not let this party become a basket case again.

"I will not let our hard-won gains be squandered so we will need to be ready in the unlikely event that the worst comes to the worst.”

Ms Nandy denied the reports were accurate, however.

She told Times Radio it was "not true at all" Mr Starmer had approached colleagues and denied she had been holding fundraising events and recruiting a team.

Asked if Mr Starmer had told her to prepare a leadership bid, she said: "Never, and if he did he would get short shrift because he and I and the rest of the Labour team have spent the last couple of weeks talking relentlessly about the problems that are being created for people in this country – soaring inflation, cost of living crisis, people not being able to make ends meet and the looming chaos on the railways, to address the problems with the buses and the problems airports as well.

"We're trying to find ways to solve this to put pressure on the government to do it, and to lay out how things can be different. We're very, very acutely aware of how much responsibility that is we don't have time to be dwelling on talking about internal Labour issues."

It follows several reports of fears within labour that Mr Starmer cannot win a general election and is seen as "boring" by voter.

Former Prime Minister Gordon Brown leapt to the Labour leader's defence, however, saying Mr Starmer should "ignore" criticism "because what's exciting about the possibility of Keir Starmer's leadership is he will have a plan for Britain".

He told the BBC : "He will show how we can get back growth.

He added: "He's been a great public servant over many years, and I think he'll make a great Prime Minister."

Previous : Queen to host as Kate Middleton and Prince William hold joint birthday party ‘in style’
Next : One in four troops ‘dissatisfied with service family home’