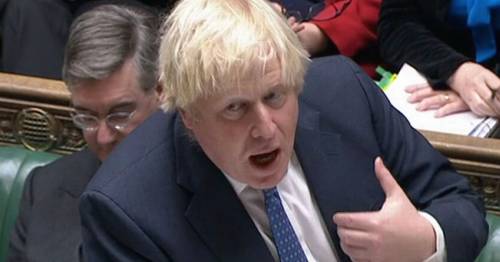 Labour's leader branded the PM a "Covent Garden pickpocket" over his broken promise that no one would have to sell their home to pay for care.

After Mr Johnson claimed he had not broken his pledge – even though some families WILL have to sell up after relatives die – Sir Keir said: “People will still be forced to sell their homes to pay for care.

Sir Keir branded last-minute changes to a planned care cap that will save £900m off the backs of poorer residents a “working class dementia tax”.

And he twisted the screws over brutal Tory briefings questioning whether Mr Johnson could continue as leader – saying: "Senior people in Downing Street tell the BBC it’s just not working."

Echoing the words of a TV interviewer on Monday he added: "Is everything okay, Prime Minister?"

He went on: "Who knows if he’ll make it to the next election – but if he does, how does he expect anyone to take him and his promises seriously?"

SNP Westminster leader Ian Blackford added: “Has he considered calling it a day before he’s pushed out the door?”

It was the second fiery PMQs in a row after Sir Keir last week called the PM a “coward” – a word the Speaker later made him withdraw.

Boris Johnson was also slammed by the Speaker for accusing the Labour leader of “Mish-conduct” over a job offer from lawyers Mishcon de Reya.

In a deliberate show of unity after empty benches last week, there were rowdy cheers from Tory MPs, with the Prime Minister replying: “Thank you very much”.

But mocking his speech, an opposition MP shouted: "Forgive me!". And Keir Starmer teased: "I see they’ve turned up this week!”

It comes after pressure mounted on Boris Johnson from his own party after a string of blunders, U-turns and revolts.

The PM has faced anger from backbenchers over tens of billions cut from high-speed rail plans, £900m a year cut from social care plans for the poor, a disastrous attempt to rip up sleaze rules, planning reforms and sewage.

He then gave a speech to business leaders in which he lost his place, impersonated a car and went on a lengthy diversion about Peppa Pig World.

Rumours have started that letters of no confidence have been sent to the backbench 1922 Committee, which has the power to remove a Tory leader.

One report by The Sun claimed up to a dozen letters had been submitted, while others put the number at around one or two.

Anger has been heightened by a last-minute change to the £86,000 cap on lifetime care payments from 2023. If you get state help in England, only what you actually pay will count towards the cap, not your council funding.

Boris Johnson was embroiled in a ferocious PMQs clash
(

Sir Keir said: “It’s a classic con game, a Covent Garden pickpocketing operation. The PM’s the frontman, distracting people with wild promises and panto speeches whilst his Chancellor dips his hand in their pocket.

"But now the PM's routine is falling flat. His Chancellor is worried that people are getting wise. His backbenchers say it's embarrassing – your words.

The PM replied: "I’ll tell you what’s not working is that line of attack."

Mr Johnson tried to insist people will not have to sell their home – while they are alive.

The 2019 Tory manifesto pledged people wouldn't have to sell homes to pay for care, without mentioning their death.

He said: "We will disregard your home as part of your assets if you and your spouse are living in it. You can have a deferred payment agreement."

“How on earth does the Prime Minister think they can get their hands on that kind of money without selling their home?" he asked.

Labour analysis suggests more than 100 northern constituencies have an average home value under £186,000 – the threshold at which people are affected by the change – compared to zero in the south.

The PM shot back at Labour: "They haven’t had the guts to fix this in all their time in government. It’s something left over from the Attlee government and we are fixing it."

Meanwhile Mr Johnson claimed he would build three new high-speed lines in the north, despite the fact these are all stripped-back from his own previous plans.

He said Sir Keir “actually campaigned against HS2” adding: "If we’d listened to Captain Hindsight we would have no HS2 at all… and we would all still be in lockdown."

The PM said: “I took a decision that it was the right thing to do for the long term interests of the whole country. How can they possibly trust that man.”

Sir Keir replied: “I think he’s lost his place in his notes again.

“The only thing he’s delivering is high taxes, high prices and low growth.”

The PM's press secretary refused to repeat the 2019 commitment on care – or to rule out any more pledges being broken.

"I would just repeat what the plan is," she said, in a testy exchange with reporters.

Even the PM’s angriest critics admit a leadership challenge is a long way off, as 15% of Tory MPs – 54 of them – would need to write letters.

But a senior Tory told the Mirror: “He’s lost his invincibility virginity, and once you lose that you can’t get it back.”

They added: “I think what seems to have dawned on a lot of people is we are more than likely looking towards a change of leader before the next election rather than 18 months after the next election.

“It’s like amateur hour at the London Palladium – lurching from one self-inflicted c**k-up to the other.”

The Deputy Prime Minister insisted Mr Johnson was "on great form" and branded growing tensions within Tory ranks over the PM's position as "Westminster village" gossip.

Downing Street was forced to tell journalists yesterday that the "PM is well" following his chaotic speech to business leaders on Monday.

Mr Raab claimed: "There will always be the scrutiny, the noisiness, that comes to British politics.

"Frankly, overwhelmingly – and I talk to colleagues, MPs on the back benches on all sides all the time – there is huge support for what we're doing and what the Prime Minister is doing."

In another interview, he told BBC Breakfast: "The Prime Minister is on great form.

"The reality is people speak about speeches in the Westminster village, the gossip and all the rest of it."

Tensions have been swirling between No10 and Chancellor Rishi Sunak's operation in No11 after the Treasury was blamed for an incendiary briefing to the BBC that "there is a lot of concern inside the building about the PM" and "it's just not working".

Allies of Mr Sunak denied the Treasury was involved in the briefing – but the Chancellor and PM have clashed several times over summer.

Mr Raab said: "It's the job of Westminster commentators to pick up on one anonymous source from wherever they found it to criticise the Government of the day, that's fine."

“Yes”. But adds “I’ve seen various anonymous source briefings that I’m not going to go into”

Previous : Nicola Sturgeon vows to stay in office until 2026 – ‘I’m going to be around a lot longer’
Next : UK weather: Snow forecast to hit UK within hours and could land ‘almost anywhere’