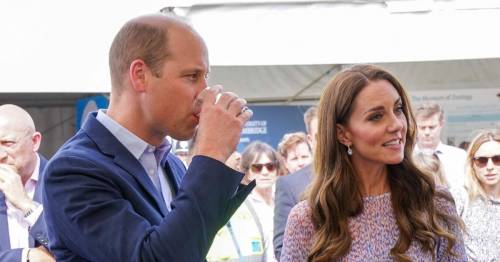 The Duke and Duchess of Cambridge enjoyed some beer and playing football at Newmarket Racecourse as part of the Queen's Platinum Jubilee celebrations.

Kate Middleton and Prince William appeared to be in jovial mood as they attended the first ever Cambridgeshire County Day on Thursday afternoon.

The day of festivities, which included racing, performances and more than 100 stalls, saw thousands of people raise money for charity but it was Kate and Prince William who stole the show.

Kate, dressed in a patterned dress and nude wedges, was seen excitedly kicking a football at a target in front of impressed crowds. Before giving it a go, Kate told the crowd it would be difficult as she was “wearing wedges”.

After taking a shot, the duchess shook the hand of a boy who had been playing before her and said: “You did better than I did.”

Kate was in good spirits as she enjoyed a kick about

Not to be outdone, Prince William also bravely gave it a shot, despite donning a navy suit and suede shoes.

The pair were then seen sipping on a cold beer to cool off as they cheerily spoke to several stall holders, and also sampled chocolate.

Kate spotted one woman holding a child and asked if she could hold her. The baby’s mother, Marianne Provoost, who had travelled from the Netherlands to watch the races, said the duchess had asked to hold her child by saying: “I love babies.”

Her daughter, four-month-old Norah, was handed back to her, with Ms Provoost telling the duchess: “Enjoy your day and enjoy your children.”

Kate and Prince William's appearance at the event came on the same day that they got stuck into a messy art session during a visit to the Milton branch of East Anglia’s Children’s Hospices (EACH).

Kate told one girl "don't be shy" as she let her paint her hand as they created a cute canvas full of handprints.

The couple spoke with families who make use of the charity’s services, including 12-year-old James Hall, who has a genetic connective tissue disorder.

Kate placed her hand on James’s knee as she spoke with his mother, Claire, and his older brother Henry.

The duke and duchess were then greeted by Kirsty and Gary Carlin, whose four-year-old daughter Libby lay sleeping on the floor beside them.

After learning about her rare genetic condition, Libby’s parents offered to wake their daughter before the duke said: “Please don’t wake her.”

Kate enjoys a cold beer while chatting to stall holders
(

“We know what happens when you wake a sleeping child,” Kate added.

Earlier today, both William and Kate were at Cambridge's Fitzwilliam Museum to unveil a newly-commissioned dazzling royal portrait – the first of themselves together as a couple.