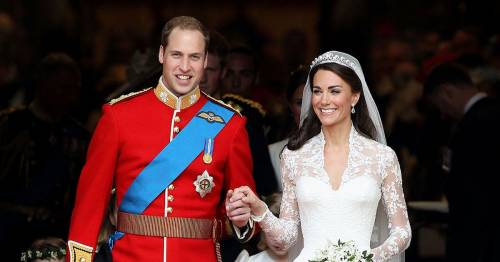 When the Duke and Duchess of Cambridge married over 11 years ago, the world was watching.

Millions of people around the world tuned in to watch as they exchanged vows at Westminster Abbey and Kate formally became a member of the Royal Family.

So knowing all eyes would be on the couple, they could be forgiven if they were feeling any nerves on their big day.

However, according to the new book The Palace Papers by ex-Vanity Fair editor Tina Brown, Kate did have one major worry when it came to the ceremony.

Brown notes that Kate was the "world's most unflappable bride" and there were "no last-minute panics" and "no tantrums".

Prince William and Kate Middleton on their wedding day
(

However, she also writes: "I am told the bride's only anxiety on the wedding day itself was that her stomach rumbling might be picked up by a hot mic."

Now 11 years on, not only do they have three children – Prince George, Princess Charlotte and Prince Louis – Kate's confidence on big occasions seems to have blossomed.

And it has been a busy week of royal duties for her and William this week with them paying a visit to Scotland for a range of engagements, where they focussed on the topic of mental health.

The couple on their wedding day more than 11 years ago
(

After arriving in Scotland, they visited St John's Primary School in Port Glasgow, where they took part in a 'Roots of Empathy' session.

And it prompted William to joke: “Can you get my wife out of here before she gets broody?”

They also visited the Kennishead area of Glasgow, where ripped up the royal rulebook by ditching formal handshakes and instead hugging a tearful pensioner during a visit to Scotland.

Afterwards, the couple visited Glasgow University where they discussed mental health with staff and students.

They heard about pioneering work being done by researchers at the school of Psychology and Neuroscience and both William and Kate met members of the public outside of the university.