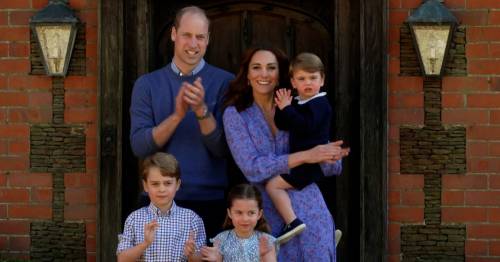 Kate Middleton has revealed that she started a sweet birthday tradition in the Cambridge household.

The night before each of her children's birthdays, the Duchess stays up until midnight baking a "ridiculous" amount of cake, say reports.

In fact, she bakes so much, she says, that one of Prince Louis' first words was Dame Mary Berry's name.

She said: "I love making the cake. It's become a bit of a tradition that I stay up 'til midnight with ridiculous amounts of cake mix and icing and I make far too much. But I love it."

Kate Middleton said one of Louis' first words was 'Mary'
(

"One of Louis’ first words was 'Mary' because right at his height are all my cooking books in the kitchen bookshelf," she said.

"And children are really fascinated by faces, and your faces are all over your cooking books and he would say 'that’s Mary Berry'."

Adding: "He would definitely recognise you if he saw you today."

Mary Berry was also full of compliments for Kate's baking.

Speaking on ITV's This Morning, she admitted that the Duchess' piping work might even be better than her own.

“I remember we were down at the RHS at Wisley and she was bringing her garden from Chelsea, the children's garden and play centre," Mary said.

"She was piping cupcakes and they were just… if not better than mine, they were beautiful and she was laughing away and enjoying it.”

Adding: “I think she's a great person, she'll have a go at anything.”

With Christmas around the corner, there are plenty of opportunities for the Duchess and her children to get stuck into baking festive treats.

Previous : Communities across the US prepare for Thanksgiving Day by giving back
Next : Sainsbury’s tells staff to work overtime or take unpaid leave for 1 hour Christmas party