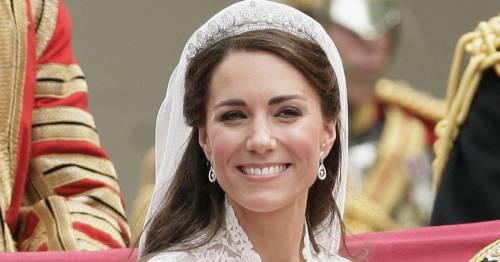 After the Duke and Duchess of Cambridge's relationship was thrust into public spotlight after their university graduation, they were fondly titled 'Kate and Wills'.

Even though her full name is Catherine, his university girlfriend became known as Kate as the world pondered if she would be our future Queen.

However, it has been reported that the Duchess of Cambridge isn't actually a fan of the name 'Kate' and even emailed her friends in 2008 asking them to call her Catherine instead.

Two years before flashing her stunning sapphire engagement ring, Kate was already thinking about the role she'd eventually occupy within the Royal Family.

Before Prince William and Kate Middleton announced their engagement, Kate was reportedly already thinking about her role in the family
(

Writing for the Sunday Express at the time, columnist Adam Helliker said: "With Prince William’s engagement now a surefire certainty (even Ladbrokes has stopped taking bets on whether it will happen after a flurry of well-placed wagers) there are intriguing signs that Kate Middleton is preparing for her future role.

"It looks like she’s taking it very seriously indeed too.

"I hear that in the past few weeks the former accessories buyer has quietly informed friends that she would like to drop the informal ‘Kate’ and in future wishes to be known by her full name: 'Catherine'."

However, despite the awkwardness, Elser claimed the duchess was “gentle” and “very jokey” about her request.

One friend reportedly told Mr Helliker: "Everyone knows it’s about to happen with Kate and William, but we were a little surprised about the request to call her Catherine.

"There is a distinct feeling she has started to become very aware of her position."

Although it's likely William would have called her 'Kate' while the pair were at university together, it's thought her full name is considered more 'royal'.

Kate uses her full name in all her official royal correspondence, and signs off her emails with 'C'.

She's not the only member of the Royal Family to go by a slightly different name.

To us, the Duchess of Sussex is also known as Meghan Markle – but this isn't quite the name on her birth certificate.

Meghan's full name is actually Rachel Meghan Markle, and if you listened carefully, you'd have heard her full name given during her wedding ceremony to Prince Harry.

In an interview with Esquire magazine, she didn't specifically say why she goes by Meghan, but suggested her parents had actually called her 'Meg' or 'Meghan' for most of her life.

Previous : Severe impacts of flooding created by perfect storm of circumstances in southern B.C.
Next : ‘Much loved’ pensioner found dead at home as man charged with murder