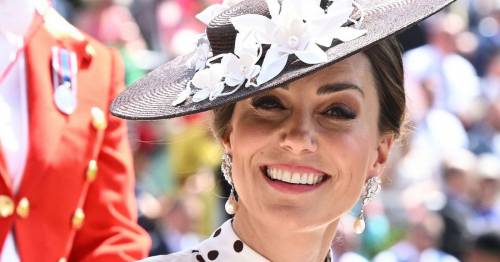 Nowadays, The Duchess of Cambridge is well known for her personable approach and dedication to her royal duties.

But it is no secret that Kate has faced her challenges along the way as she struggled to carve out a role for herself in the early days following her wedding to Prince William in 2011.

In the first years, there were questions asked about the small number of engagements she attended and whether she was working hard enough.

While this was the case, the Duchess has steadily grown her royal role and is now considered to be one of the most indispensable members of the family.

A famed royal biographer has praised Kate's careful and well-thought-out approach and said that it reminds him of Diana, Princess of Wales.

The Duchess of Cambridge reminds Andrew Morton of Diana
(

She has grown in confidence over the years
(

The Mirror's royal podcast, Pod Save the Queen, spoke to biographer, Andrew Morton, about his 25th book 'The Queen' and he detailed exactly what it is about The Duchess of Cambridge that reminds him of the late Diana, Princess of Wales.

Morton explained: "I realised after watching the Royal Family for all these years that it takes a long, long time to really understand what it is like to be royal.

"Catherine Middleton has spent ten, twelve years coming to terms with it. So did Sophie Rhys-Jones (The Countess of Wessex) and she's got a much lower profile – or did.

"It just takes a long time to absorb yourself into it.

"Catherine was quite a shy person, so making speeches and being in public was something of an ordeal but I think she's overcome that.

"She reminds me so much of Diana. She struggled for a few years to come to terms with what it is like to be a princess."

The biographer continued: "The great tragedy, I think, is that Meghan and Harry didn't give it long enough to see whether they could give it a go. They were on the out almost before the wedding music had finished.

"Meghan is a natural… she had the great possibility of using her talent and her position to make a genuine change to the world. I don't think she's going to make such a change living in Montecito."

The mum-of-three has been supported in her role
(

During a recent visit to Cardiff Castle with Prince George and Princess Charlotte, The Duchess of Cambridge chatted to well-wishers in the crowd and received a huge compliment.

In a video shared on Twitter, Kate can be seen shaking hands with people when one lady tells her that one day she will make a great Princess of Wales.

Kate then replied and could be heard to say: "That's very kind of you. I'm in good hands" as she gestured towards Prince William.

When Prince Charles succeeds to the throne, Kate's Duchess of Cambridge title will go back to the crown, meaning it is free to be used by another royal.

The Duchess of Cambridge was given huge amounts of guidance and support to ensure she was as confident as possible in her new role.

According to the documentary 'Kate Middleton: Working Class to Windsor', Catherine had private lessons that focused on 'how to be a royal wife'. During these sessions, The Queen even helped her decide what her official royal title would be.

Journalist Ashley Pearson said in the documentary: "From the beginning, Kate Middleton had a great deal of support from the Royal Family which was really instructed by the Queen.

"There were all kinds of small details and little bits of etiquette – how to sit, who to curtsy to, who not to curtsy to, what fork to use and whatever else they felt she needed to know. She was actually given lessons on how to be a royal wife."