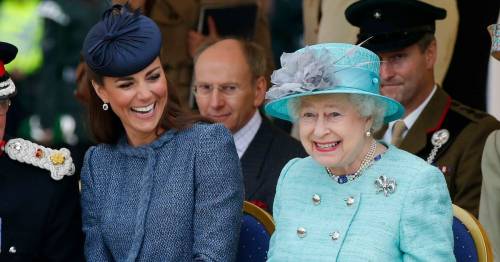 The Duchess of Cambridge must have been incredibly nervous as she prepared for her first Christmas with her royal in-laws.

After marrying into the family in April 2011, she was invited to the traditional festive celebrations at Sandringham later that year.

She knew she had to impress her new husband's grandmother, the Queen, and somehow had to think of the perfect festive gift for the woman who can have anything.

In line with royal tradition, Kate had to pick a personal or funny gift rather than opting for a luxurious, expensive item – and she managed to come up with the perfect gift.

Rather than heading to the shops, she made the Queen a gorgeously personal gift – and it went down a treat.

Kate was really nervous about giving the Queen her gift
(

In her first solo television interview, Kate spoke about making the Monarch a batch of chutney from her own grandmother’s recipe during an ITV documentary for the Queen’s 90th birthday.

She said: “[The Queen] really cares. I can remember being at Sandringham for the first time at Christmas. And I was worried about what to give the Queen as her Christmas present.

“I was thinking, ‘Gosh, what should I give her?’

“I thought back to what I would give my own grandparents, and I thought ‘I’ll make her something.’ Which could have gone horribly wrong. But I decided to make my granny’s recipe of chutney.”

Despite her fears, the gift was a big hit. Kate added: "I was slightly worried about it, but I noticed the next day that it was on the table.

"I think such a simple gesture went such a long way for me and I've noticed since she's done that on lots of occasions and I think it just shows her thoughtfulness, really, and her care in looking after everybody."

The Duchess of Cambridge chose to make chutney for the Queen
(

It turns out that the best gifts really do come from the heart.

The recipe is thought to have been a marrow chutney, a kind of fruity condiment that can be paired with cheese or bread.

It’s worth noting here that the marrow refers to a squash, rather than the bone variety.

And there's a chance that Kate's sister, Pippa, revealed the recipe in her 2012 cook book, Celebrate, which includes instructions for 'Granny's Marrow Chutney', which takes several hours to prepare.

If you fancy giving it a whirl, here’s the recipe:

2 tablespoons mixed pickling spices, secured in a piece of muslin

Put the chopped marrow, onions and apples into a large preserving pan, add the rest of the ingredients and the bag of spices and stir together, then place over a medium heat.

Bring to a simmer, then reduce the heat and simmer gently from 1 ½-2 hours or until well blended and thick. Take the pan off the heat, cool and remove the muslin, squeezing the liquid form from the bag. Spoon it into sterilised jars with vinegar-proof lids, filling them to within 1cm of the top.

Ensure the rims are clean, screw on the sterilised lids and store in a cool place for up to 12 months. Once open, store in the fridge and use within 1 month.

The documentary, Our Queen At 90, also featured interviews with Prince Charles and the Duchess of Cornwall, Princess William, Prince Harry, Prince Andrew and his daughters Princess Beatrice and Princess Eugenie.

Another clip from the show shows Kate revealing little Prince George’s nickname for the Queen – Gan-Gan.

She also said that the Queen ‘always leaves a little gift or something’ in the rooms of Prince George and Princess Charlotte when they come to stay – how utterly adorable.