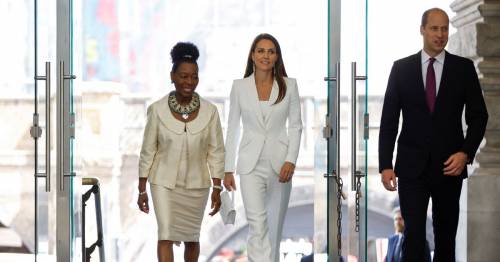 The Duke and Duchess of Cambridge have helped to unveil a national monument dedicated to the Windrush generation.

Prince William and Kate visited London's biggest railway station, Waterloo, for the reveal of the monument, which celebrates the dreams and courage of the Windrush generation.

The statue – of a man, woman and child in their Sunday best standing on top of suitcases – is being unveiled today to mark Windrush Day.

It has been designed by the Jamaican artist and sculptor Basil Watson, who said it had been an honour to create the monument.

For the event, Kate wore a white Alexander McQueen blazer she previously donned on a trip to Jamaica earlier this year. She paired it with white trousers and a pair of statement earrings as she and William gathered alongside members of the Windrush generation for the unveiling.

The couple wave to the crowds at the event this morning
(

The Duke, who turned 40 yesterday, also gave a speech where he also paid his own tribute to the Windrush generation.

Earlier the couple also visited a youth group in Brixton to meet with younger generations of the British-Caribbean community.

They visited ELEVATE, an organisation that helps young people build creative skills, and Kate, a keen photographer, was shown how to use a special camera.

Kate shakes hands with a young girl at Waterloo station
(

Meanwhile, the Queen also sent a message to mark the unveiling of the National Windrush Monument at Waterloo Station.

The written message read: “It gives me pleasure to extend my congratulations on the creation of the National Windrush Monument.

“The unveiling at Waterloo Station on Windrush Day serves as a fitting thank you to the Windrush pioneers and their descendants, in recognition of the profound contribution they have made to the United Kingdom over the decades.

The royal couple accompanied by Baroness Floella Benjamin, Windrush passengers Alford Gardner and John Richards and children next to the new statue
(

“It is my hope that the memorial will serve to inspire present and future generations, and I send you my warmest good wishes on this historic occasion.”

The message was signed Elizabeth R.

The Government, which has provided £1million in funding for the project, said it "symbolises the courage, commitment and resilience of the thousands of men, women and children who travelled to the UK to start new lives from 1948 to 1971”.

Kate on a visit to youth group ELEVATE, where she was shown how to work a camera
(

It also acknowledges the Windrush generation’s “outstanding contribution” to British society and is intended to be “a permanent place of reflection”, it added.

Waterloo station was chosen because thousands of people who arrived from the Caribbean passed through the station on their way to start their new lives across the country, the Government said.

The unveiling is one of dozens of events and activities across England to celebrate Windrush Day 2022.

Next year marks 75 years since the arrival of HMT Empire Windrush at Tilbury docks in 1948, bringing 500 passengers from the Caribbean.

More than 100 leaders from politics, faith and civil society, sport, culture and business have signed a joint letter, published in The Times newspaper, starting the one-year countdown to the milestone.