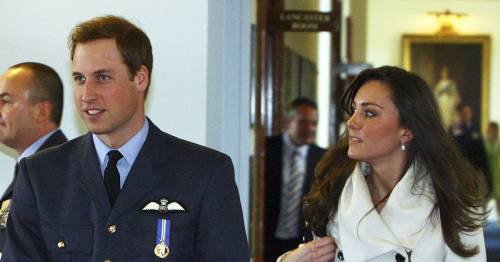 The Duke and Duchess of Cambridge have been happily married for more than 10 years after marrying in a lavish wedding in 2011.

But their relationship dates all of the way back to 2001 when Prince William first met Kate when they were students at St Andrews University in Scotland.

Their romance blossomed during their studies but after they graduated, their relationship seemed to hit a rocky patch.

At the time, around 2006, Kate was living in London, while William had joined the military and was in training at Sandhurst Academy.

And according to royal author Katie Nicholl, William was forced into choosing between returning to London or spending time with his new Army friends in his spare time, reports The Express.

Katie told the 2011 documentary William and Kate Into the Future: "I think Kate pushed him into a corner. I think she wanted some more commitment. William was hard at work at the military, very busy – he had exams, training.

"He was very involved with his military commitments. And I think at the same time it had become increasingly difficult for them to spend time together.

"William would spend Monday to Friday at the barracks in Bovington, so his time was completely taken up with military commitments, and at the weekends he ended up staying up with his friends, his new Army pals.

"He didn't want to back to London every weekend."

In 2007, the couple briefly called time on their romance during a phone call that Kate took while at work at her job as an accessories buyer for Jigsaw.

However, the split is only said to have last 10 weeks with the book Battle of Brothers claiming that William found dating difficult, was turned down by a "surprising" number of young women, and missed Kate and her family.

William and Kate with their three children George, Charlotte and Louis
(

The book says: "William had found dating difficult, for a start, when a surprising number of young women from his circle turned him down flat.

"They could suss out the truth about where his heart lay, even if he himself could not."

Three years after their reconciliation, the couple got engaged in October 2010 and tied the knot in a grand ceremony at Westminster Abbey in April 2011.

Oldest son Prince George was born in July 2013, followed by Princess Charlotte in May 2015 and Prince Louis in April 2018.

In April, the couple celebrated their 10th wedding anniversary and to mark the occasion, they shared two loved-up portraits of themselves beaming into the camera.

They also released an adorable family video of them climbing sand dunes on a trip to the beach as well as running around in a garden and toasting marshmallows over a fire.