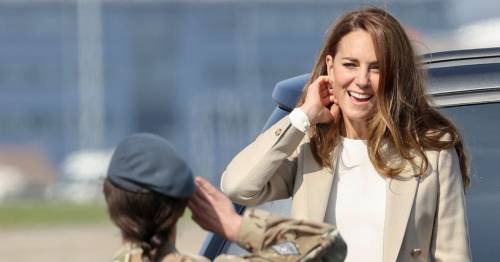 Kate Middleton has arrived at RAF Brize Norton to thank troops for their part in the evacuation in Afghanistan.

The Duchess of Cambridge with meet with those who supported the UK's evacuation of Brits and those who helped during the conflict from Kabul airport last month.

She will hear about Operation PITTING, where more than 15,000 people were flown out by the RAF.

An Islamic State suicide bombing killed scores of Afghan civilians and 13 American soldiers in the final chaotic hours at the site.

Her husband Prince William 'personally intervened' to get the family of an Afghan officer he knew from Sandhurst out of Kabul amid chaos at the airport, according to reports.

The Duke of Cambridge was said to have heard about a former cadet who was trying to get his family out as the Taliban seized the country.

The Duchess arrived at the RAF base this afternoon
(

The royal is reported to have asked his equerry, Naval officer Rob Dixon, to make calls on his behalf.

After those calls were made the officer, who is reported to have served with the Afghan National Army, managed to get his family on to a flight back to the UK.

It has been reported that his family escaped the country, who were a group of more than 10, made up of several women and children, all of whom were already eligible to leave the country.

The Duchess has just returned from her brother's wedding in France
(

Kate's appearance at the Oxfordshire base is her first since returning from her brother James's wedding in France.

Prince George, Princess Charlotte and Prince Louis were all on hand to see their uncle James marry Alizée Thevenet.

James is several years younger than Kate and other sister Pippa, and is the only son of parents Carole and Michael Middleton.

Previous : What latest Covid data tells us about winter ahead – and chances of Plan B ‘lockdown-lite’
Next : Uni students fury after missing out on halls – only to be offered rooms 50 miles away