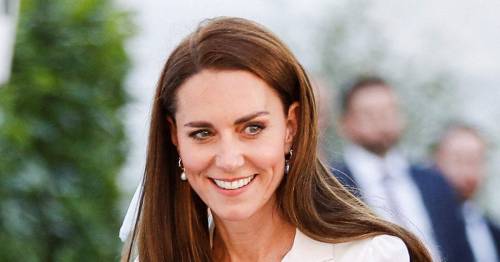 The Duchess of Cambridge is more resilient than she appears and is completely smitten with her husband Prince William, a friend has claimed.

As William prepares to turn 40 on Tuesday (June 21) and becomes a more established and confident heir apparent, the friend revealed that it is his relationship with Kate that keeps him calm, grounded and ready to do his royal duty.

Despite being quietly spoken and reserved in the public eye, the friend insisted that Kate is "tougher than she is often given credit for" and William relies on his wife as the pressures of royal life are set to only increase for the pair.

The unnamed friend told the Sun : “His marriage to Catherine has been crucial.

"She loves him for who he is, in spite of his title, not because of it

"She is his anchor and he relies on her calmness and her counsel.

"She is tougher than she is often given credit for, and William relies on her hugely.”

The royal couple are reportedly going to throw a joint party after Kate's 40th was thwarted by Covid back in January.

The venue is unconfirmed, though there are murmurings of it being held at Windsor Castle or Sandringham.

William is also a committed father who has made his priorities clear – first and foremost the raising of his children and then engaging in his campaign work on mental health and the environment.

The Duke of Cambridge with his children, Prince Louis, Prince George (right) and Princess Charlotte, to mark Father's Day 2022

Get the royal news you want straight to your inbox. Sign up for a Mirror newsletter here

Despite a relentlessly busy schedule, he reportedly makes time for the school run on a regular basis and is often spotted at his children's sports matches.

In fact, the couple's 2019 trip to Islamabad was famously delayed so that Kate and William could drive George and Charlotte to school – their flight forced to wait on the tarmac.

Many royal experts think it clear that Prince William has finally found a happy medium in his life and has set his priorities in order, which will help him continue to become an impactful and effective member of the Firm.

Indeed, with the launch of his £50 million environment-championing Earthshot Prize, and with his sensitive campaigning for mental health awareness, at 40 William appears to be coming into his own as a man who could make a successful modern monarch.

It will not be without challenges, however, and the weightof expectation on Wiliam is undoubtedly enormous.

The future King looked pensive at last month's state opening of parliament and again at the jubilee national service of thanksgiving at St Paul's, prompting some concern.

A friend told the Sunday Times that this was because William "knows the future (of the monarchy) rests on his, Catherine's and his kids' shoulders and that's a lot of pressure".

However, despite his brother Harry's infamous remark during his bombshell interview with Oprah that William and his father Charles, the Prince of Wales, were "trapped" in their royal roles, another friend insisted that William was "fully accepting of doing his duty and fulfilling what the public expect of him without paying too much attention to what he would have liked to have done in another world".