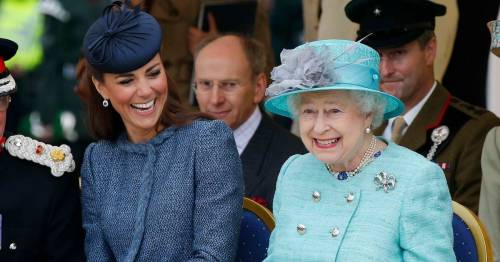 Since marrying into the Royal Family, the Duchess of Cambridge seems to have struck up sweet bonds with her in-laws.

And one royal she appears to share an especially strong relationship with is the Queen.

Although Prince William's romance with Kate blossomed during their university days – it wasn't until years after that Kate finally officially met the Monarch.

It was thought that at first the Queen had some concerns about Kate as a future wife for her grandson.

But these concerns have clearly faded away with the pair now enjoying a close bond.

Here we look at how their relationship bloomed…

Kate Middleton with the Queen on an engagement in 2012
(

William and Kate first started dating while both attending St Andrews University in Scotland between 2001 and 2005.

They both graduated in the same ceremony attended by the Queen, but despite being an item, it seems an official meeting between Kate and Her Majesty came much later.

In fact, it was in 2008 at the wedding of William's cousin Peter Phillips to his now ex-wife Autumn.

Recalling the meeting during an interview to mark their engagement, Kate said: "Well I first met her at Peter and Autumn's wedding and again it was in amongst a lot of other guests and she was very friendly."

Kate and the Queen on a rare joint engagement in 2019
(

But despite the friendly meeting, the Queen reportedly did have her reservations about Kate as a future wife for William.

Royal expert Katie Nicholl claims Her Majesty always liked Kate but was worried she didn't have an identity of her own before she married into the Royal Family.

In her book, The Making of a Royal Romance, Katie writes: "Privately she had grave concerns and believed that Kate needed to have a job and an identity in her own right before an engagement was announced."

And she's not the only one, with royal correspondent Phil Dampier echoing the claims and saying the Queen was worried about Kate's work ethic.

Phil told express.co.uk: "Kate was William's girlfriend for eight or nine years before they got engaged and got married.

"There was a phase where she appeared to be doing very little really.

"The Queen once remarked Kate doesn't do very much so I think she had a fairly long entrance to the Royal family."

However, it seems the Queen's doubts were short-lived and before marrying William she was invited to spend some time at the Queen's Scottish retreat Balmoral.

Keen for Kate to feel welcome, the Monarch then gave Kate a rare privilege.

According to author and royal commentator Katie, the Queen allowed Kate to take photos while at Balmoral, knowing how much she loved photography.

It may not sound like a big deal to the average person, but as Katie explains this simply wasn't the done thing usually.

In her book, Kate: The Future Queen, she wrote: "Until now the Queen had met Kate only fleetingly at the wedding of Peter and Autumn Phillips, but she went out of her way to make her feel welcome, giving her permission to take pictures at Balmoral."

And according to Katie, this and being invited to Balmoral showed how the Queen was ready to let Kate into the inner royal circle.

She added: "As a woman who has lived her entire life in the public eye, the Queen rarely lets her guard down, and very few apart from her family and closest friends get to see the real Elizabeth."

Kate and William finally wed at Westminster Abbey in April 2011, with the proud Queen watching on as her grandson tied the knot.

And in a sign of her approval, Her Majesty allowed Kate to wear her beautiful Cartier Halo tiara on her big day.

But it's not just the tiara that Kate has borrowed from the Queen's personal collection over the years.

She's also worn her Cambridge Lover's Knot tiara, her Lotus Flower tiara, a pair of sapphire earrings and one of her pearl chokers.

But it's not just the Queen who has gifted Kate several pieces of jewellery.

Kate has also given Her Majesty sweet gifts – including a touching homemade present on her birthday.

The Duchess revealed how she had been in a pickle over what to get the Queen for her birthday.

And in a documentary to mark the Monarch's 90th birthday, she revealed: “I was thinking, ‘Gosh, what should I give her?’

“I thought, ‘I’ll make her something.’ Which could have gone horribly wrong.

"But I decided to make my granny’s recipe of chutney. I was worried about it, but I noticed next day it was on the table.

“Such a simple gesture went such a long way for me.”

So what is it that makes the two women get along so well?

According to royal author Victoria Murphy, it's their very similar personalities.

She told Yahoo UK : "I’ve always thought that Kate has more in common personality-wise with the Queen; not an extrovert, but quietly self-assured with a love of the outdoors and the ability to compartmentalise.

"I think she still remains more of a team player than a leader though and perhaps more of a listener than a talker, but I think these qualities are well-suited to her current and future roles."

Previous : Yet another Wiarton Willie is dead. Here’s a look at the strange history behind the beloved groundhog
Next : UK Covid cases soar past 10million and hit highest daily level in a month