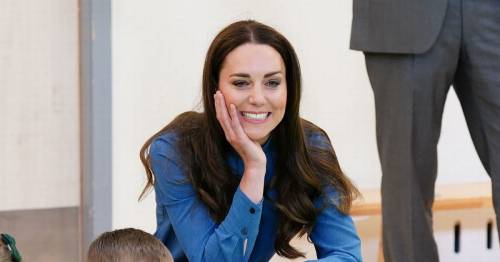 The Duchess of Cambridge has revealed a cute new detail about her youngest child Prince Louis.

Kate and husband William are currently on the second day of a 48-hour trip to Scotland – and yesterday visited the Wheatley Group in the Kennishead area of Glasgow.

While there, they were invited into the home of mum Joanne Wales, who is mum to four-year-old Jason, who is the same age as Louis.

As the adults chatted, young Jason was eager to show William and Kate his Spider-Man and Hulk toys.

And it prompted Kate to reveal: "Louis, our little boy, loves Spider-Man too.”

A beaming Kate on a visit to Glasgow yesterday
(

Joanne, who has been a single parent since her partner died nearly two years ago, later said she enjoyed talking to the couple.

The mother, whose children are aged between four and 12, said: “They were absolutely lovely and straight away they were talking to Jason about superheroes.”

Earlier in the day William and Kate toured St John’s Primary School in Port Glasgow to learn about an innovative project where children interact with a mother and baby to learn about its development and aid their emotional empathy with others.

Prince Louis is a fan of Spider-Man
(

They watched as Laura Molloy brought her 10-month-old baby Saul for a regular session where the children quizzed her about the infant.

Just weeks ago, William and Kate released new pictures of Louis as he marked his fourth birthday.

The three Cambridge children with their mum and dad
(

Louis is seen grinning for the camera as he sits on the sand in pictures taken earlier this month in Norfolk, with royal fans suggesting he resembled both his mum and his dad in the new images.

Others suggested he is a dead ringer for the Duchess’s dad Michael Middleton, with his trademark smile and mop of light brown hair.

In other pictures, the cheeky lad holds a bright orange cricket ball and is seen taking a run-up as if he’s bounding down the pitch to bowl a fast delivery.

Kate, also mum to Prince George and Princess Charlotte, proudly took the images while the family enjoyed a break at their country residence, Anmer Hall.

The Duchess has taken to snapping pictures of her children on their birthdays to celebrate their milestones with the nation.

Some pictures have taken a sports theme or special nod to family members, such as their eldest Prince George’s sixth birthday when he donned an England football clip or for his recent eighth birthday when he sat on a Land Rover on the Queen’s Sandringham estate, in a nod to the late Duke of Edinburgh.

Previous : ‘Prince William has proved men can still hug each other – and it matters’ – Emily Retter
Next : Hay River, N.W.T., reports extensive flooding damage after all 3,700 residents ordered to leave