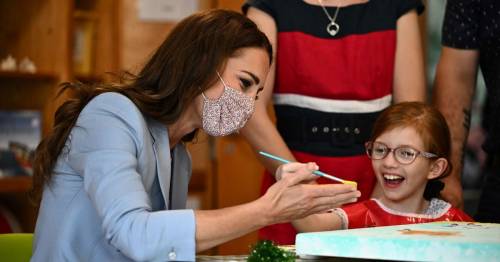 The Duchess of Cambridge got her hands dirty as she got stuck into a messy art session at a children's hospice.

Kate told one girl "don't be shy" as she let her paint her hand as they created a cute canvas full of handprints.

The Duchess, alongside Prince William, visited the Milton branch of East Anglia’s Children’s Hospices (EACH) on Thursday, which was opened by Diana, Princess of Wales in 1989.

The couple were greeted by cheers and a round of applause by school children from the region, who waved flags upon their arrival during Children’s Hospice Week.

The Duchess was presented with a bouquet of flowers by 15-year-old Chloe Bowes, who has a neurological condition called bilateral perisylvian polymicrogyria.

Kate puts a hand print on a canvas for the hospice
(

Kate, who has been patron of EACH for 10 years, donned a floral face mask as she entered the hospice.

William joined her as they met three families who make use of the charity’s services, including 12-year-old James Hall, who has a genetic connective tissue disorder.

Kate placed her hand on James’s knee as she spoke with his mother, Claire, and his older brother Henry.

The duke and duchess were then greeted by Kirsty and Gary Carlin, whose four-year-old daughter Libby lay sleeping on the floor beside them.

After learning about her rare genetic condition, Libby’s parents offered to wake their daughter before the duke said: “Please don’t wake her.”

“We know what happens when you wake a sleeping child,” Kate added.

The couple then met the Carlson family, whose son William was lying on a bed in front of them.

The duke and duchess learned about the 11-year-old’s many complex medical conditions, including a brain malformation called lissencephaly.

The pair also took part in a small art session, where a canvas full of handprints was laid out in front of them.

The duchess invited the youngster to paint her hand, and as she tentatively started, Kate said: “Don’t be shy.”

Once her hand was completely covered in paint, she pressed her hand down on the canvas and was cheered as she lifted her hand up to reveal the handprint.

At the same time, William helped the children add to the canvas by sticking seaweed on it.

Before departing the hospice, William and Kate met the bereaved family of four-year-old Douglas Wright, who died from a rare cancer called neuroblastoma in February 2018.

As the couple sat down with the Wright family in the hospice’s sensory garden, they were told about the end-of-life care the youngster had received from the hospice.

“It brings back all the memories,” Douglas’s mother Jane said as she spoke about being back at the hospice.

Earlier today, both William and Kate were at Cambridge's Fitzwilliam Museum to unveil a newly-commissioned dazzling royal portrait – the first of themselves together as a couple.