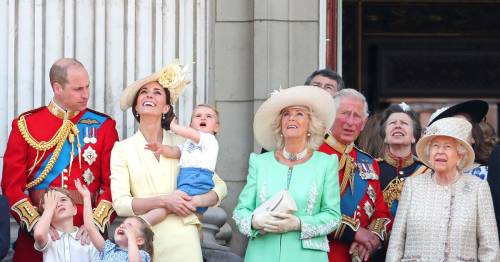 It's been two years since Prince Charles and his sons William and Harry drove through the gates at Sandringham for what would prove to be a meeting that would change The Firm forever.

The Sandringham Summit saw the senior royals sit down with the Queen to discuss the finer details of Meghan Markle and Harry's shock decision to quit their roles in favour of a life overseas.

The 24 months since have been difficult for the royals, with tell-all interviews, racism claims and sexual assault allegations against Prince Andrew – which he strongly denies. They also said goodbye to the Queen's strength and stay, Prince Philip.

Royal expert Robert Jobson believes that even now, the family are still feeing the impact of the hole left by the Sussexes, especially since Andrew was forced to step down.

He tells the Mirror: "Two years on front the Sandringham summit the dust has settled over Harry and Meghan’s decision to quit as full time royals.

"So much has changed, but one thing is certain – the Sussexes’ departure has left the Monarchy in a worse position.

"Why? Because they were international stars, who shone a light on Britain and what is good about our country, our diversity and our humour.

"What followed were accusations of racism aimed at the royal family by the couple and more bitter recriminations.

"I travelled with the couple on the tours they did before they decided to abandon their jobs.

"As a country we benefitted from the afterglow as they toured Fiji, Tonga, Australia, and Morocco.

"And before Meghan, Harry was regarded as the most popular royal, whose work with AIDS and helping ex service personnel much lauded.

Kate and William have stepped up their duties
(

"The bitterness that emerged during the South Africa tour and the legal wrangling that followed – only led them to a series of legal spats with then media, and inevitably attacks from both sides.

"The once cool couple, who were seen as energetic, youthful and fun, suddenly became pariahs.

"But I fear the monarchy, as we approach the soon-to-be 96-year-old Queen’s Platinum Jubilee, appears a tired institution, dated, in need of renovation, an uplift."

Since the start of the pandemic we've seen the Queen step back from some of her duties, firstly due to lockdown restrictions and then for medical reasons.

With Charles and Camilla also deemed high risk due to their age, it fell to the younger royals to keep things going over – with the Duke and Duchess of Cambridge and Sophie Wessex and Prince Edward taking centre stage.

Prince Andrew has also stepped back from his royal roles
(

Robert explains: "We sadly lost the patriarch Prince Philip last April and since then the Queen has scaled back her engagements.

"Prince Charles continues with his gruelling schedule at home and abroad, ably supported by his future Queen Consort Camilla.

"When he was snapped almost falling asleep as the Queen’s representative at the handover of Barbados who could blame him? He was jet lagged and exhausted.

"At 73, nobody can question his work ethic. He is totally committed to Crown and duty and is taking a lead role. But he is only human.

"There had been talk that Charles was planning a cull of lesser royals and wanted to streamline The Firm when he is king.

"His thinking behind such a move was to make the institution more cost effective and perceived to be more efficient.

"Such a cull is no longer really needed with Harry and Meghan’s self-imposed exile and The Duke of York’s enforced absence from royal life due to ongoing sex case.

"With a civil case against him brought by trafficked Virginia Roberts – now Mrs Giuffre – who accuses him of having sex with her three times whilst under the age of 18.

"That means he is no longer seen as a working member of the royal family and a return to public life of the 61-year Duke, is extremely unlikely.

"So the streamlining has happened naturally.

"It means going forward, that the pressure will increasingly on the Charles and Camilla

"But long term it will be William and his wife, Catherine, who will carry the heavy burden of making the Crown relevant.

"This year promises to be especially difficult for the queen.

It's been a tough few years for the family
(

"Yes, she will be the focus of national celebration as we commemorate her 70 years on the throne this summer in public, and she will do so privately on 6 February, the anniversary of her father’s death.

"But this year she will no longer have Philip.

"Her strength and stay for so many years throughout her long and celebrated reign, he was always her wisest of counsel.

"The Queen now relies more and more heavily upon her son Prince Charles and a grandson, Prince William to steer the ship of monarchy in the right direction.

"Whether the departure of Harry and Megan and the enforced retirement of Prince Andrew has seriously damaged the royal family only time will tell.

"But it seems that the monarchy is less stable than it once was. Already Barbados became a republic, ditching the Queen after all her years of service as Head of State.

"Other former colonies may follow, including Jamaica, where there has been a push towards a Republic.

"Only time will tell whether Australia, New Zealand and Canada will follow when Charles becomes Kong.

"For William and Catherine, however, the shining star stars of the monarchy, there is no respite.

"With Meghan and Harry out of the picture, the spotlight is on them and the extra workload too."