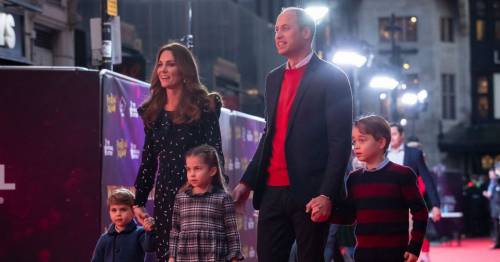 He may only be eight years old, but Prince George is set to one day be King.

But despite his status, it's actually another royal child who takes charge of the others, according to the Duchess of Cambridge and the Queen.

And that youngster is George's younger sister, six-year-old Princess Charlotte.

Back in 2017, mum Kate remarked on her daughter's sassy nature during a chat with fellow parent Samantha Burge at an event for service personnel and their families.

After their "mummy chat", Samantha told reporters: "She said that Charlotte is growing up really fast. She is the one in charge."

While in 2019, the Queen also gave an insight into the personalities of her great-grandchildren when presenting a young girl with a signed Bible as part of a school religious education project.

According to the Eastern Daily Press, the Queen asked the youngster if she "looked after" her younger sister at school, and the girl's mum replied: "It's the other way around."

Princess Charlotte sits next to the Queen, who is surrounded by some of her great grandchildren and the late Prince Philip
(

This prompted the Queen to add: "It's like that with Charlotte and George."

There have been several moments where Charlotte's confident personality has been on display in recent years.

At the christening of her younger brother Prince Louis, she famously chastised photographers and told them "you're not coming" as the family headed back to enjoy a tea party in Louis's honour.

And in 2019, she also stuck her tongue out at the crowds when she attended a sailing regatta on the Isle of Wight alongside her mum Kate.

In May, days after her sixth birthday, her dad Prince William admitted that his daughter was "growing up fast".

Asked about her birthday celebrations, William said: "She had a lovely day thank you.

"Last year it was her birthday in lockdown but this year we were able to have one other family over.

"They grow up very fast. It was great fun."