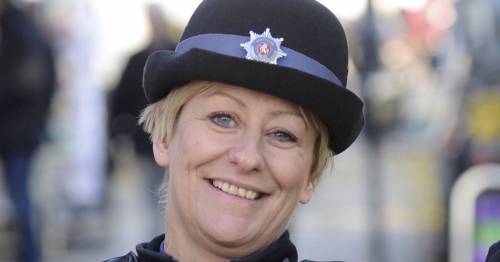 A murder suspect may have carried around the weapon he used to beat a PCSO to death in an attempt to goad other officers towards him, a jury has heard.

Callum Wheeler, 22, is accused of killing Julia James, 53, as she walked her dog in the rural hamlet of Snowdown, between Canterbury and Dover, Kent, last April.

He admitted killing her, but denies murder.

During his arrest, Wheeler denied any involvement in Julia's death, while making comments such as: "Sometimes I do things I cannot control", the prosecution claimed.

Canterbury Crown Court heard today that after Ms James was killed, Wheeler was spotted carrying a blue holdall with a long object poking from it – covered with a Tesco carrier bag.

The prosecution claims the bag he was carrying contained the same weapon – a "railway jack" – which had been used to repeatedly beat Ms James until she was dead.

"He kept a check on the police cordon. He ran away from police officers and concerned members of the public such as Mr Tucker.

"You will want to consider why he was behaving in that manner."

She added: "The defendant went out again carrying the weapon that he had used to kill Julia James. Why he did that is known only to him.

The alleged murder weapon – a 'jack' typically used to lift parts of the railway – measured nearly a metre in length at 38in (96.6cm) and weighed more than 6.6lbs (3kg), the court heard.

Julia James' blood was found at various places on the railway jack, while Callum Wheeler's DNA was also found upon it, the prosecution said.

Particles from the railway jack pole were also later found in Julia James' hair, it was alleged.

Ms Morgan said the prosecution believes Wheeler "waited for Julia James or another vulnerable female to be in that woods".

She told the court: "He waited to ambush her, he chased her down. She ran, desperate to get away from her attacker.

"She had no chance of survival. As he hit her in that way repeatedly using that weapon, he knew that, and he intended it."

A dashcam video shown to the court captured one man's encounter with Wheeler in Aylesham, the day after Julia's death, where he challenged him, asking "what are you up to?" before the suspect ran away towards the village.

The man also took two clear images of Wheeler which were later released by police as part of a press appeal, leading to more witnesses coming forward, the jury was told.

Wheeler can be seen in the images "with his black-and-blue holdall, and with the metal bar covered at one end with the Tesco carrier bag", prosecutors alleged.

A map of events surrounding the murder
(

Ms Morgan claimed that the day after killing Julia, Wheeler was out "playing games…running around trying to avoid police officers… running in and out of hedges, and into wooded areas".

On April 30 – three days after Julia's death – two witnesses reported seeing a man "looking weird", standing in the street where Julia lived and watching police as they guarded the crime scene.

The prosecution allege Wheeler was out carrying the murder weapon again on May 4 – a full week after Julia's death.

The jury was told of the "considerable police presence" in the area of the rural hamlet of Snowdown following Julia's death.

On May 7, the clear photo taken of Wheeler in the area the day after Julia's death was circulated by police via the press.

Officers visited his home to arrest him shortly before 9.30pm that day, the court was told.

Police were let into Wheeler's home by his father, but Wheeler "had barricaded himself into his bedroom", said prosecutors.

Inside Wheeler's bedroom, officers found the murder weapon – a railway 'jack handle' – wrapped in plastic bags, the court was told.

Jurors were told Wheeler's DNA was found on Julia's clothing such as her coat and Wellington boot – and on a white vest top she was wearing beneath two layers of clothing.

Ms Morgan said the jury must consider how the DNA came to be on her vest top, "underneath her grey jumper, underneath her blue coat" – and "what the defendant must have done, must have touched, for it to be there".

The court heard Julia James' blood was found on trainers owned by Wheeler.

After Julia's death, her husband helped police put together an e-fit of the male walker, which the prosecutors said bears "a striking similarity" to Wheeler.

The prosecution said multiple witnesses saw Wheeler walking in the Aylesham area in the days leading up to Julia's death.

Julia had been a police community support officer since 2008, and worked within the domestic violence unit at Canterbury police station.

A post-mortem investigation revealed she suffered "significant head injuries", sparking a widespread hunt for her killer.

Hundreds of cops scoured the fields near the alleged murder site
(

Hundreds of police officers spent weeks scouring land surrounding the rural hamlet of Snowdown.
Addressing the jury, Ms Morgan defined murder as "unlawful killing of another person with intention of killing that person or causing them at least really serious harm".

The trial, presided over by Mrs Justice Cheema-Grubb, is expected to last four weeks.

The High Court judge told jurors they will be carrying out site visits to see for themselves where the alleged crime took place.