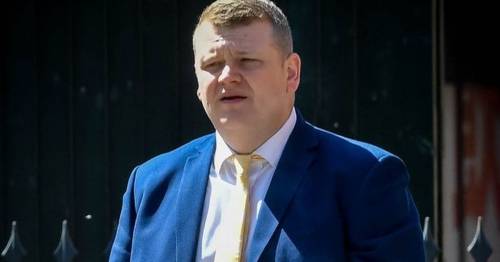 A judge halted a court case when he realised he knew the paedophile he was sentencing.

Christopher Jeacock, 37, had pleaded guilty to the making of indecent images of children, possession of a prohibited image of a child and possession of an extreme pornographic image.

After confirming that Jeacock worked for Hale United FC, he stated he could not continue sentencing him, Manchester Evening News reports.

Judge Savill said: “I can’t do this case. It’s not your fault – very unfortunate but it’s one of the prices we pay for local justice.

"The bottom line is there cannot appear to be any kind of prejudice or advantage to you by virtue of any connection you or I may have.’’

The case was adjourned so it could be dealt with by another judge.

A warrant was executed at his home, which he shared with his parents, and he was arrested and his devices were searched.

While police were searching his bedroom, Jeacock told cops that his parents had "nothing to do with this" and that he knew nothing about the images, the court heard.

Officers seized an iPad and two iPhones. He was interviewed that same day in March last year and admitted it was likely that he had viewed the images.

Ms Wright said: "He said he had used the Kik messenger site to enter chat groups where images were shared and he had clicked on Dropbox links which automatically downloaded into his personal Dropbox.

“He stated he knew they were illegal material and should have done something about them. He accepted the devices were his and he was solely responsible for its contents.”

The videos depicted children as young as three being sexually abused by adults and one of the extreme pornographic videos showed a man having sex with a dog, the court heard.

Jeacock, of Bowdon, was handed a three-year community order
(

In a further police interview, he gave a prepared statement in which he accepted the devices belonged to him. He said that since his arrest in 2021 he had made a conscious effort to address his offending and ensure it does not recur.

Jeacock said in a statement: "I have received support from my GP, the Greater Manchester Mental Health team, and I have discussed my mental health with my family and friends who have both been very supportive.

He added that he worked with the Safer Lives programme, which is designed to assist sex offenders.

The statement continued: “From March 2020 my mental health deteriorated, my business shut down and created financial issues and the loss of social involvement led me to feeling alone."

“I was worried about my partner's problems and I became isolated. This led me to sit on the computer where I became involved in group chats. I am truly devastated by my behaviour and genuinely remorseful for my actions.”

Jeacock was said to have one unrelated previous conviction. His barrister, James Heyworth said his client does not have face-to-face contact with children and said it was possible for the devices to be wiped.

Sentencing, Recorder Ciaran Rankin said he had read a letter from Jeacock, his mother, the Safer Lives Programme note of attendance and his presentence report.

He told Jeacock: “You have accepted that you are responsible."

Jeacock, of Bowdon, was handed a three-year community order, 200 hours of unpaid work, 10 days of rehabilitation activity requirements and an Accredited Sex Offender Programme. He was made the subject of a Sexual Harm Prevention Order and the Sex Offenders Register, both for five years.