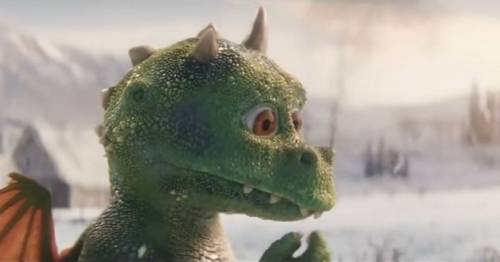 A children's author is suing John Lewis after claiming their 2019 Christmas campaign advert bears a "striking similarity" to her book about a fire-breathing dragon.

Fay Evans, 48, self-published "Fred the Fire-Sneezing Dragon" in 2017, but said it's "soul destroying" to think someone else may have used her idea and she feels as though the story is "part of" her.

John Lewis said it will "robustly" defend itself against the claims, saying the concept for their advert was presented to them in early 2016 – a year and seven months before Ms Evans published her book.

Ms Evans told Lincolnshire Live : "Since this advert came out two years ago it has just been a really surreal experience.

"When the advert was released I was getting lots of messages from people saying that the story reminded them of Fred and initially I just thought it was a coincidence, until I actually saw the advert myself."

Fay is now taking legal action against John Lewis and the creative team behind the 2019 advert through the High Court's specialist Intellectual Property Enterprise Court.

After serving legal papers on John Lewis, which has now acknowledged the copyright infringement claim being made against it, the department store chain now has until December 22 to file a defence.

But a spokesperson for John Lewis said: "Having provided Ms Evans with the time-stamped documents that show the concept for our Christmas campaign was first presented to us in early 2016 – one year and seven months before her book was published – we are surprised to have received this claim."

John Lewis said it will "robustly" defend itself against the claims, saying the concept for their advert was presented to them in early 2016
(

But Fay says that these time-stamped documents are "utterly irrelevant" to her case, as she says that the issue is not "when the idea first emerged" but about the "creative process" of transforming the idea into the advert.

Fay is currently working with The Lowry theatre in Salford to turn "Fred the Fire-Sneezing Dragon" into a stage musical, having published her second children's picture book in 2018.

She added: "It's kind of soul-destroying to think that someone has used your work because especially as a children's author, I really have to use my imagination to come up with my stories and so they are a part of me.

"This is about standing up for creatives everywhere because the experience I went through was heart-breaking and I don't want anyone else to have to go through it."

A John Lewis spokesperson added: "We strongly deny that we have copied or drawn any inspiration from the book, and will be robustly defending the claim."

Previous : ‘Glue me back together’: Online pleas to aid parade victims
Next : Terrified Blackpool thrillseekers stuck 260ft in air as Europe’s tallest ride breaks down