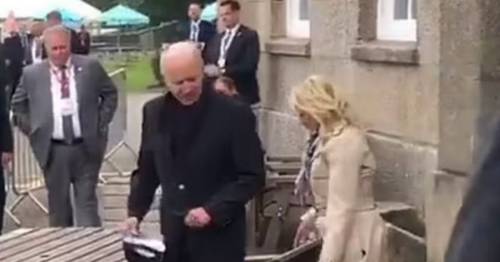 Pictures have surfaced of US President Joe Biden in a casual attire as he wore running shoes while unwinding at a bar with his wife Jill.

The Bidens were spotted enjoying some drinks at a bar in Cornwall ahead of the G7 summit, which starts on Friday.

Mr Biden was seen in running shoes and a cap as he relaxed at the bar with his wife Jill, who also dressed down in jeans and trainers. 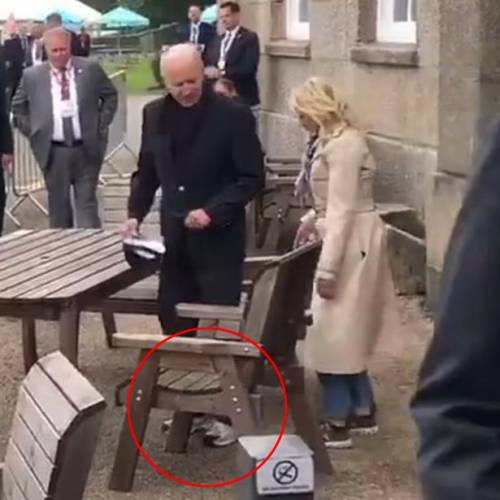 The BBC crew quickly collected their stuff to make way for the US leader while staff swept in to clear the table for him.

According to Sopel, Mr Biden, 78, played it safe ahead of G7 with a Coca Cola, while his wife treated herself to a glass of wine.

He tweeted: "A first in my career @POTUS comes and sits down at table in a bar next to me and orders a drink. Am trying to act nonchalant #G7."

It came soon after Prime Minister Boris Johnson had a one-to-one with the president and described him as a "breath of fresh air". 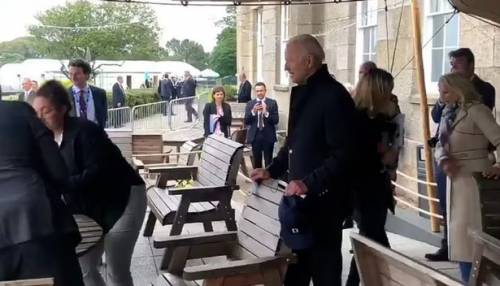 The US President took over the BBC's table, with staff sweeping in to clear it for him
(Image: BBC)

That while Mr Biden, who took over Republican leader Donald Trump in January, said he had a "very productive meeting" with the PM.

He told reporters in Cornwall the revitalised Atlantic Charter would address the "key challenges of this century – cyber security, emerging technologies, global health and climate change".

Mr Biden also said Mr Johnson had led a "strong campaign to get people vaccinated across the UK". 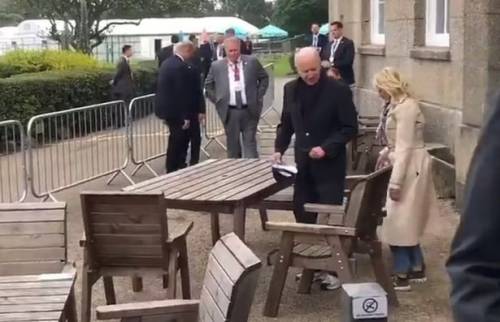 Jill too was dressed casually as she wore jeans and trainers
(Image: BBC)

Mr Johnson and his newly-wedded wife Carrie were seen hand in hand enjoying a walk with the Bidens, who also held hands as they walked cheerfully beside their counterparts.

The couple also exchanged presents, with the PM, who is known to be passionate about cycling, receiving a US-made bike and helmet.

Douglass, a former slave who became a leading figure in the abolitionist movement, travelled to Britain and Ireland in the 1840s on a speaking tour.

Mrs Johnson received a leather tote bag made by military wives and a presidential silk scarf from Dr Biden.

Some of the most powerful world leaders arrived in Cornwall's Carbis Bay on Thursday for the G7 summit, which starts on Friday and will last till Sunday.

Previous : Mum kidnapped and threatened with screwdriver as daughter listened over the phone
Next : AnEsonGib puts rivalry with Jake Paul to one side for Tyron Woodley fight