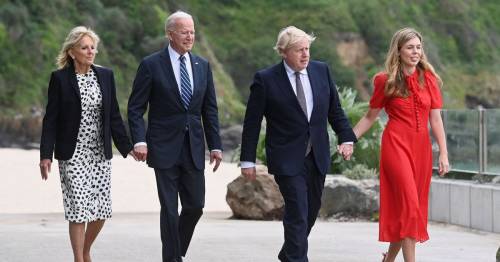 Joe Biden and Boris Johnson have met for the first time – with the US President cracking a joke about their wives.

The leaders are holding face-to-face talks at the G7 summit in Cornwall, marking the US President's first overseas trip since taking office.

Mr Biden and his wife Jill joined the Prime Minister and Carrie Johnson to admire the view overlooking St Ives Bay, with Mr Biden saying: "It's gorgeous. I don't want to go home."

The US President took in the vista as he arrived in the Carbis Bay for resort for talks with Boris Johnson.

As the two men sat next to each other, Mr Biden said: "I told the Prime Minister we have something in common. We both married way above our stations." 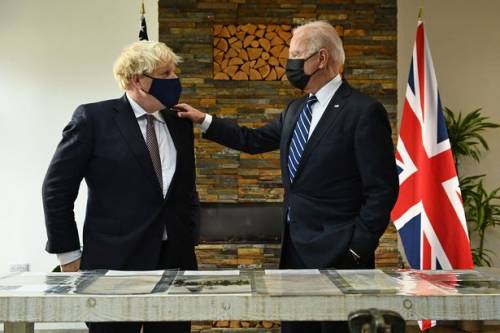 Boris Johnson and US President Joe Biden met for the first time at the G7 summit in Cornwall
(Image: AFP via Getty Images)

Carrie Johnson, 33, wore a stunning red dress for her husband's first meeting with the President.

First Lady Jill Biden wore a white dress with black spots and a black jacket with the word “LOVE” written on the back.

Some 27,000ft up, the PM”s RAF voyager plane, which is also an air-to-air refuelling tanker, circled at 480mph, ready to top up a Eurofighter Typhoon which was also circling in case it needed to intercept any threats. 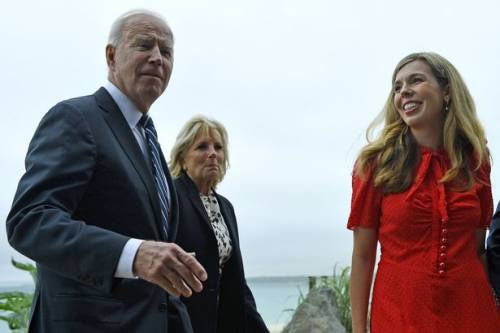 Mr Biden is expected to use the meeting to issue a warning to the PM about the deepening row over the impact of the Brexit deal on peace in Northern Ireland.

The US President, who has deep ties to Ireland, is due to stress the need to "stand behind" the Northern Ireland Protocol, a key part of the Brexit deal.

The UK and the EU are locked in a fierce dispute over the protocol, which has caused disruption and anger in Northern Ireland by effectively creating a trade border down the Irish Sea.

Mr Biden reportedly ordered the most senior US diplomat in London, Yael Lempert, to deliver a demarche – a formal protest – in a meeting with Brexit minister Lord Frost on June 3.

"Lempert implied that the UK had been inflaming the rhetoric, by asking if he would keep it 'cool'," according to minutes seen by the Times.

A No 10 spokesman failed to deny the report, saying: "I don't think you would expect me to get into discussions with other countries."

The issue threatens to overshadow the much-anticipated meeting between Mr Biden and the PM at the G7 summit, which begins on Friday.